Tankers!!
We will show you one of the latest versions of the most famous "workhorse" of the German armored divisions: The Panzer IV Ausf H (Sd.Kfz 161) , wearing winterketten tracks. 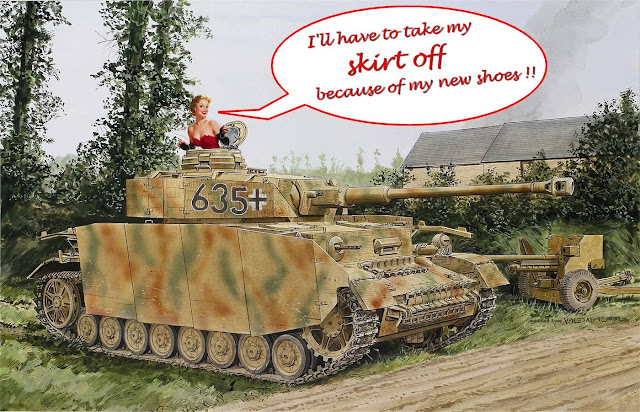 The Panzerkampfwagen IV (PzKpfw IV), commonly known as the Panzer IV, was a German medium tank developed in the late 1930s and used extensively during the Second World War. Its ordnance inventory designation was Sd.Kfz. 161.
The Panzer IV was the most numerous German tank and the second-most numerous German armored fighting vehicle of the WWII, with some 8,500 built. The Panzer IV chassis was used as the base for many other fighting vehicles, including the Sturmgeschütz IV assault gun, the Jagdpanzer IV tank destroyer, the Wirbelwind self-propelled anti-aircraft gun, and the Brummbär self-propelled gun. 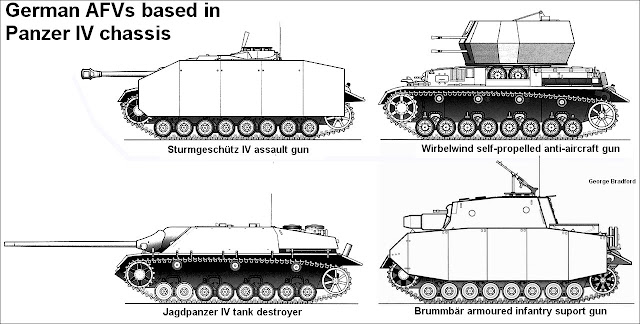 The Panzer IV saw service in all combat theaters involving Germany and was the only German tank to remain in continuous production throughout the war. It received various upgrades and design modifications, intended to counter new threats, extending its service life. Generally, these involved increasing the Panzer IV's armor protection or upgrading its weapons, although during the last months of the war, with Germany's pressing need for rapid replacement of losses, design changes also included simplifications to speed up the manufacturing process.

The Panzer IV was partially succeeded by the Panther medium tank, which was introduced to counter the Soviet T-34, although the Panzer IV continued as a significant component of German armoured formations to the end of the war.

About 8,553 Panzer IVs of all versions were built during World War II, a production run in Axis forces only exceeded by the StuG III assault gun with 10,086 vehicles.
To learn more about the Panzer IV and its variants, I recommend reading this more complete article, here at Panzerserra Bunker.
The main character of this article will be Panzer IV Ausf H, wearing the special tracks winterketten. This combination was requested by the customer who ordered this model, so let's learn a little more about this particular model and these special tracks. Because of the use of winterketten, which were much wider than normal tracks, the vehicle was unable to use the additional armor skirts (schürzen). This is the justification for the joke with pinup, at the beginning of the article ...

Panzer IV Ausf H:
As we had seen it before, the Panzerkampfwagen IV was the most important German tank during the WWII. It remained in mass production throughout the war. and with some 8,000 units produced, it represented more than one-third of Germany's entire wartime tank production. As the backbone of the German Armored Divisions, the name "workhorse" cannot be considered an exaggeration. The Pz.Kpfw. IV underwent constant improvement throughout its long career, and Ausf. H is generally regarded as the definitive model, with respect to both performance and produced number: 3.774 units outnumbered any other variant.
The Ausf.H is roughly classified into the early, mid and late production versions, and the early H model had a close relationship with the preceding late production "G" model. Both versions used identical suspension system and wheels. Weapons consisted of a powerful, efficient, long-barreled KwK40 L/48 tank gun plus two 7.92mm MG34 machine guns (coaxial and bow front hull). Thin steel plates known as "Schürzen" (skirts) were introduced on the Ausf.G, and succeeded the Ausf.H. These skirts increased the vehicle safety, especially against hollow-load projectiles from American Bazookas and British PIATs.
The Maybach HL120TRM engine also remained the same, but an improved SSG-77 transmission was coupled on the Ausf.H. However. the extra weight of some 1.5 tons. due to added armor and increased ammunition. lowered its top speed to 38km/h, which proved 2km/h slower than the G.  The Ausf.H was mass produced from April 1943 to July 1944.

Special tracks:
For this project, my client requested the use of special Winterketten tracks, instead of the normal 400mm wide tracks of the Panzer IV Ausf. H. Let's take a look at this interesting detail.
Winterketten tracks were developed in 1942 for use in winter conditions on the Eastern Front. These were basically a normal track with links with extensions that protruded from the ends of the tracks and used a standard length track link pin. These are recognizable by the long triangular extensions. These were usually found on the PzKpfw III, PzKpfw IV, StuG III and StuG IV, but could also be seen on Hummel, Nashorn and other vehicles with Panzer IV type suspensions.
Some tracks segments show a special ice cleat segment was could be added for extra grip on ice.

The winterketten tracks greatly increased the tank's "flotation" capacity, in snow and muddy terrain, but they also generated a greater effort in the transmissions. As the tracks were very wide, the driver had to drive the tank with care, as a sudden driving could cause breaks in the tracks or even damage to the tank's transmission.


Ostketten tracks were developed later in the War, in 1944, for use in the muddy conditions in the Spring and Autumn on the Eastern Front, the terrible Rasputitsa, but it was also suitable for ice and snow conditions.

These were basically a wider link track than the usual link which was fitted, but not as wide as the Winterketten. There were no triangular extensions or ice cleats, just a wider portion of the link and also used a standard length track link pin.
These were for use usually on the PzKpfw IV, StuG III and StyG IV (as you can see here, in Bunker...) but could also be found on other vehicles. When seen on the PzKpfw IV it looks like a PzKpfw V Panther track on a PzKpfw IV...

The larger surface area of the tracks lowered the total ground pressure of the tank and allowed the tank to move over muddy ground without getting stuck in the mud.
Incredibly, Ostketten's performance in the mud was considered superior to that of Winterketten, as Rasputitsa "stuck" too much to winterketten's "wings", forcing the tank's transmission to the limit ...

The Rasputitsa refers to the biannual mud seasons when unpaved roads become difficult to traverse in parts of Belarus, Russia and Ukraine. The word may be translated as the "quagmire season" because during this period the large flatlands become extremely muddy and marshy, as do most unpaved roads. The term applies to both the "spring rasputitsa" and "autumn rasputitsa" and to the condition of the roads during those seasons.
The Rasputitsa occurs more strongly in the spring due to the melting snow but it usually recurs in the fall due to frequent heavy rains. See below in this film the dreadful conditions that the German drivers faced in the Eastern Front ...
Many confuse Winterketten with Ostketten. In addition to the size, that winterketten is much larger, a detail that differentiates them more quickly is that the winterketten extents (the wings) appear to be thinner and more fragile, almost exaggerated in their length. The Ostketten seem to be better proportioned.


Vehicles that were seen using the special tracks:

The assembly of the kit is very simple, as are all Tamiya of this generation. I always jokingly say that if you want to throw the pieces on the bench, they fit themselves ...

The client requested a well-worn but well-worn winter painting ... I decided to make the markings and the painting of the same unit as the StuG IV assault gun, from my previous article ...
Meet my Panzerkampfwagen IV Ausf. H, vehicle 618, belonging to the 12th SS Panzer Division "Hitler Jugend", from the German Army South Group, 6th Panzer Army, fighting in Operation Spring Awakening, in Hungary, in the early days of March 1945. 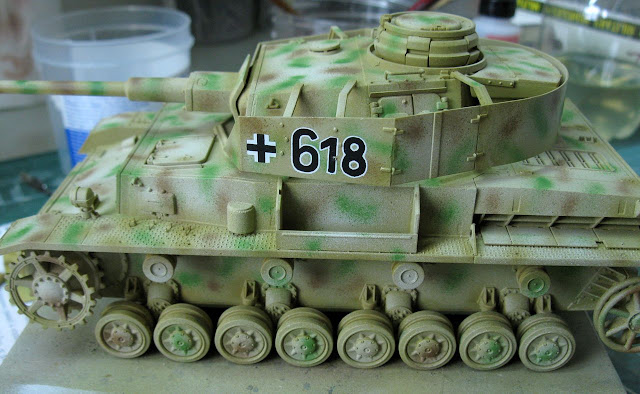 The girl was ready for combat... This is my Panzerkampfwagen Panzer IV Ausf. H, vehicle 618, belonging to the 12th SS Panzer Division "Hitler Jugend", from the German Army South Group, 6th Panzer Army, fighting bravely in the Operation Spring Awakening, Hungary, in the early days of March 1945. 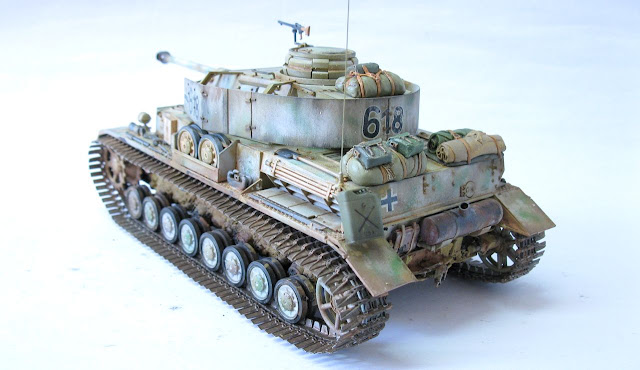 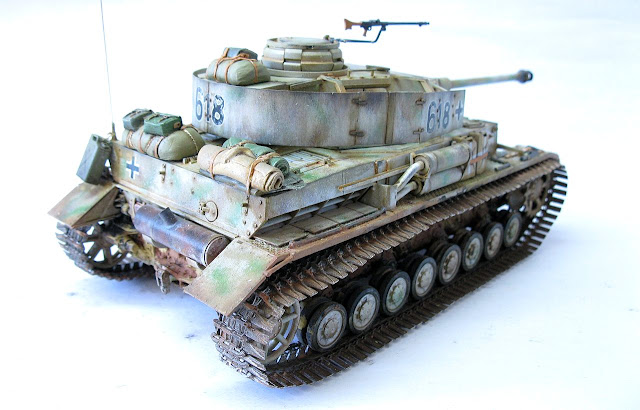 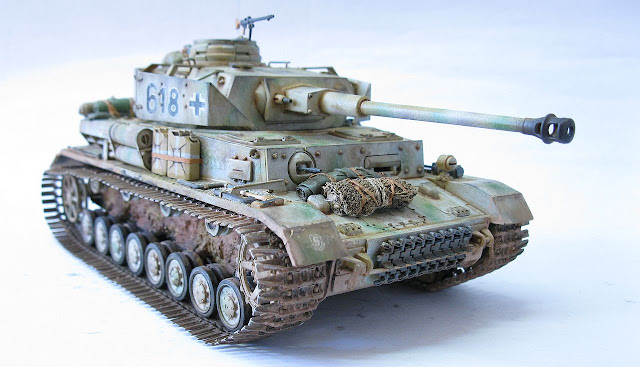 See you soon, in my next project!!
Take care and stay safe, my friends!!