The purpose of this article is to show you a small vehicle that started its career as an excellent transportation option for the family and turned into a low-cost staff car for the German war effort in WWII. Let's talk about the small but brave Opel Kadett K38 staff car.

The Opel automobile manufacturer is part of German automobile history. From the early days of bicycle manufacturing in the 1862s to its first passenger cars, Opel has always sought to improve and develop safe and affordable vehicles.
In the 30's, with the frenzy of post-WWI German industrialization, Opel launched on the market one of its most famous products, the Opel Kadett, and the 37/38 models were produced this year, for civil purposes, until the end of 1940, contributing to the German war effort. Civilian vehicles were requested as staff cars and those that remained in production were destined for this purpose.
In the top front of  the engine hood, these cars proudly bore the Opel symbol: the shape of a stylized airship.
The Opel Kadett/Olympia line was virtually identical, with variations in the number of doors and finish. The name Kadett refers to the militarism in vogue among the German people and the Olympia, a tribute to the 1936 Berlin Olympic Games.
The first Opel car to carry the Kadett name was presented to the public in December 1936 by Opel's Commercial-Technical director, Heinrich Nordhoff, who would in later decades become known for his leadership role in building up the Volkswagen company.
The new Kadett followed the innovative Opel Olympia in adopting a chassis-less unibody construction, suggesting that like the Vauxhall 10 introduced in 1937 by Opel's English sister-company, the Opel Kadett was designed for high volume low-cost production.
Kadett serie 11234 - 1937
For 1937 the Kadett was offered as a small and unpretentious two door "Limousine" (sedan/saloon) or, at the same list price of 2,100 German Marks, as a soft top "Cabrio-Limousine". The body resembled that of the existing larger Opel Olympia and its silhouette reflected the "streamlining" tendencies of the time. The 1,074 cc side-valve engine came from the 1935 Opel P4 and came with the same listed maximum power output of 23 HP  at 3,400 rpm. The wheelbase, at 234 cm, was right between the little P4 and the larger Olympia. The "11234" nomenclature stands for the engine's displacement in deciliters (11)  followed by the wheelbase in centimeters (234).
The brakes were now controlled using a hydraulic mechanism. The suspension featured synchronous springing, a suspension configuration already seen on the manufacturer's larger models and based on the Dubonnet system for which General Motors in France had purchased the license.
The General Motors version, which had been further developed by Opel's North American parent, was intended to provide a soft ride, but there was some criticism that handling and road-holding were compromised, especially when the system was applied to small light-weight cars such as the Kadett. By the end of 1937 33.402 of these first-generation Kadetts had been produced.
Kadett KJ38 and K38 - 1938-40
From December 1937 a modified front grill identified an upgrade. The 1,074cc Opel 23 HP engine and the 2,337 mm wheelbase were unchanged, with few differences between the cars for 1937 and those for 1938.
The manufacturer now offered two versions of the Kadett, designated the "Kadett KJ38" and the "Kadett K38" the latter also being sold as the "Kadett Spezial".  Mechanically and in terms of published performance there was little to differentiate the two, but the "Spezial" had a chrome stripe below the window line and extra external body trim in other areas such as on the front grill. The interior of the "Spezial" was also better equipped. The major difference was that the more basic "KJ38" lost the synchromous springing with which the car had been launched, and which continued to be fitted on the "Spezial". The base car instead reverted to traditional rigid axle based suspension similar to that fitted on the old Opel P4.
The base car was available only as a two-door "Limousine" (sedan/saloon). Customers looking for a soft-top "Cabrio-limousine" would need to specify a "Kadett Spezial". For the first time Kadett buyers, provided they were prepared to choose a "Kadett Spezial" could also specify a four-door "Limousine" (sedan/saloon) bodied car.
Competitive pricing led to commercial success, and Kadetts continued to be produced during the early months of the war: by the time production ended in May 1940, following the intensification of World War II, 106,608 of these Opel Kadetts were produced on the assembly line at Opel's Rüsselsheim plant, which had been the first major car plant in Germany to apply the assembly-line techniques pioneered by Henry Ford.
The car had a well-used interior, with reverse-opening rear doors (four-door version). For the time, it was an excellent investment option for a fast, economical and accessible vehicle, with good internal use.

These details made it an excellent option as a low-cost staff car. Its engine, though only 1.1 liters of displacement, was robust and reliable, an important detail in a military vehicle. See (and listen...) below the 1.1 liter engine of Opel Kadett 1936 running:
During the war, the Opel Kadetts served in every theater of operations, gallantly handling their transport and liaison duties from the dizzying start of the World War to the final bitter days of the German III Reich.

At the end of the war, with the defeat of Nazi Germany in 1945, the assembly line of the Opel Kadett was transferred completely to the Russians, as compensation for the war, and the Soviets started to manufacture the 1938 Kadett as Moskvitch 400, in the Factory ZMA Moscow, from the year 1947 to 1956. It was exactly the same car, with minor alterations such as an external rearview mirror (which Kadett didn't have) and logos and friezes. 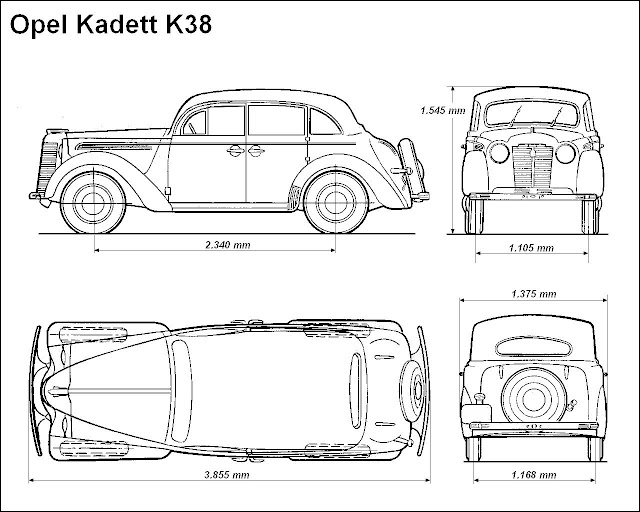 
When building the exhaust system, the exhaust pipe was made with thicker copper wire. Note that the barrel is divided into an anterior and a posterior portion, which facilitates the "folding" of the wire. Also notice the small piece of yellow sprue I made to compensate for the somewhat short length of the cardan shaft. Another great detail are the aluminum foil strips that act as clamps for the muffler and the tail end of the exhaust...

The front suspension has been carefully aligned and bonded with Cyanoacrylate and Epoxy. I made the steering bar in copper wire which, in addition to detailing the kit, increases the suspension's structural reinforcement.
Taking advantage of the work with copper wire, I made the peculiar holder for the taillight and license plate of this car. This detail is very interesting... Also note that the rear bumper is already glued in place...
Continuing the detailing of the car, the installation of the Notek lamp and the view of the license plate and the taillight on its holder... Also note that the front bumper is already glued and aligned.

The gas tank nozzle was made with a piece of styrene tree (scrap) heated (sprue) and, while still hot, its end was compressed to form the boss that would be the cap of the gas tank. See details below.
As I decided to make a vehicle on the Russian front, my goal was to paint it with the base color (Panzer-Gray) and then apply the famous white-wash camouflage (originally made with lime and applied with large paint brushes), to then make a heavy weathering on the vehicle.
At the time (twenty years ago...), I chose a thick winter camouflage for my painting, with Kadett featuring the markings of the 1st Skijäger Division, Wermacht's specialist Division in the Russian Front, in the winter of 1944.
Interestingly, years later, ICM chose these same colors and markings (but with poor historical research, as the ICM profile is dated Winter 1942 and this Division was created in 1943-44) to adorn their Kadett K38 2-door. Of course, the inspiration came from photos of this valiant division of ski soldiers.

But let's get back to the project... After the first gray paint  coat dries, a bath with a rough and grainy matte-white paint (like the true picture above...) , to give a coarse appearance to the painting that was originally done with lime and brush...
Note the irregularities in the paint... As I was going to do a heavy weathering, I'm not worrying about making an immaculate finish at this stage...

As at that time (2001) there was neither the ICM kit (Kadett K38 Saloon - #35478) with its decal sheet nor the aftermarket decal options we have today (Star Decals - #35-851), the way was to make the decals with a transparent decal and a laser printer. Luckily the white "background" was ready!
But first, let's do a little more historical research (which ICM seems to be too lazy to do...). Let's locate the Military Unit in the time and space... and behold the most beautiful photo: our Kadett, in good mechanical and human company!!!
Well, decals made with transparent decal sheet and laser print. piece of cake!! 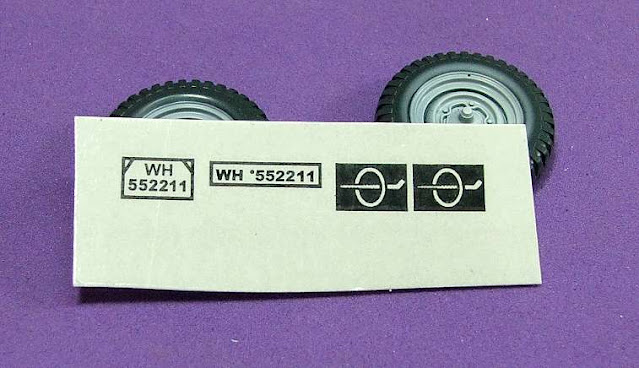 And that's how this little staff car model remained, which I immensely enjoyed building: with you, the Opel Kadett K38 (1938) 4 doors staff car, attached to Wermacht, Army Group Centre; 1. Skijäger Division, Skijäger Regiment 1; 8.(Schweren) Kompanie, in the cold days of the Winter of 1944, Russian front.