Today we are going to talk about one of the most important armored vehicles used by the Germans in WWII. It was the attack vehicle with the highest number of units produced by Nazi Germany, with unprecedented effectiveness and reliability. Our theme this time is the Sturmgeschütz III, in its G version. Let's find out more about the Stug III Ausf G... 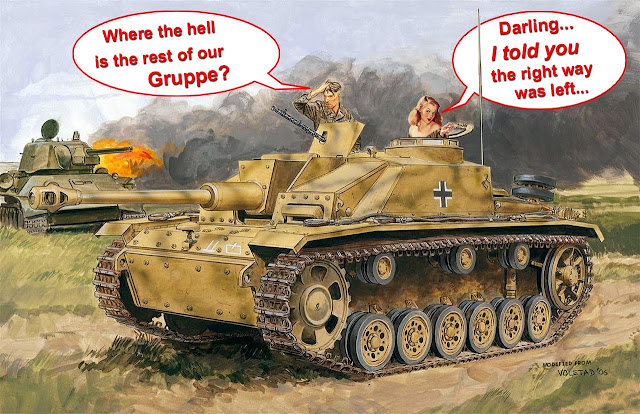 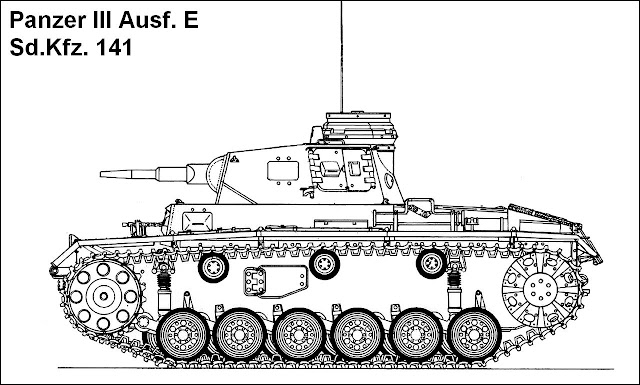 StuG IIIs were also exported to other nations friendly to Germany, including Bulgaria, Hungary, Italy, and Spain. Hungary fielded its StuG IIIs against Soviet forces as they invaded their country in end-1944 up until early 1945.

As with Hungary, Bulgaria received several StuGs from Germany too but almost none saw service against the Soviets, the country having ended the alliance with Germany by switching sides to the Allies before the Soviets invaded. Post-WWII, these were used for a short time before being turned into fixed gun emplacements on the Krali Marko Line on the border with neighbouring Turkey.

StuG IIIs were also given to the pro-German Ustashe Militia in Yugoslavia, most of which were captured in Yugoslavia by Tito's Yugoslav partisans during and after the war, as did German-operated vehicles. These were used by the Yugoslav People's Army until the 1950s when they were replaced by more modern combat vehicles. Spain received a small number (around 10) of StuG IIIs from Germany during WWII, later sold to Syria between 1950 and 1960. Italy received the smallest number of StuG IIIs Germany distributed in the war, with only 3.
After the Second World War, abandoned German StuG IIIs remained behind in many European nations Germany occupied during the war years, such as in Czechoslovakia, France, Norway and Yugoslavia. The Soviet Union also captured hundreds of ex-German StuGs, most ending up being donated to Syria. An Italian 12.7 mm Breda-SAFAT machine gun taken from Syrian Fiat G.55 was mounted on commander cupola with retrofitted anti-aircraft mount. Syria continued to use StuG IIIs along with other war surplus armoured fighting vehicles received from the USSR or Czechoslovakia (varying from long-barrelled Panzer IVs (late models) and T-34-85s) during the 1950s and up until the War over Water against Israel in the mid-1960s. By the time of the Six-Day War in 1967, many of them had been either destroyed, stripped for spare parts, scrapped or emplaced on the Golan Heights as pillboxes. Some remained in service up to the Yom Kippur War in 1973. None remain in service today.      A few Syrian StuG IIIs ended up in Israeli hands and have become war memorials or simply left rusting away on former battlefields.
Variants
Production numbers were: 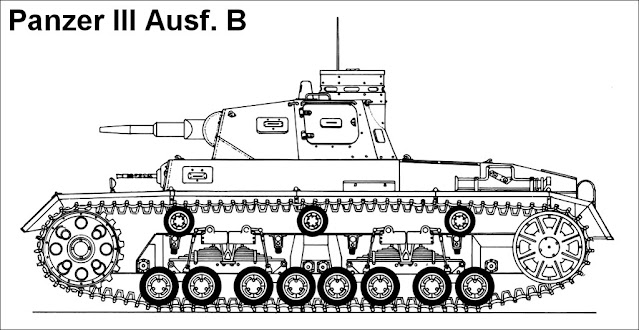 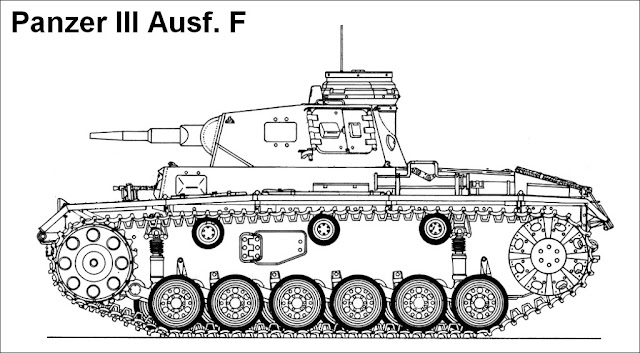 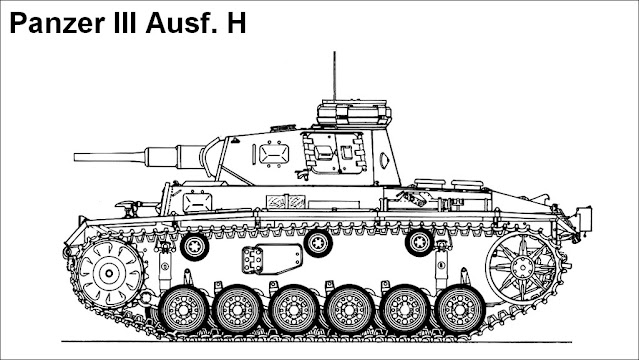 A rotating cupola with periscopes was added for the Ausf G.'s commander. However, from September 1943, the lack of ball bearings (resulting from USAAF bombing of Schweinfurt) forced cupolas to be welded on. Ball bearings were once again installed from August 1944. Shot deflectors for the cupolas were first installed from October 1943 from one factory, to be installed on all StuGs from February 1944. Some vehicles without shot deflectors carried several track pieces wired around the cupola for added protection. 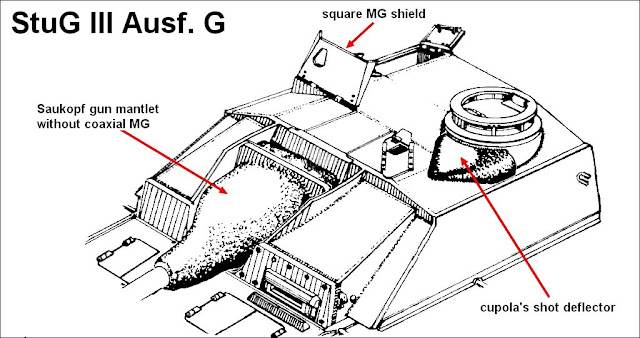 From December 1942, a square machine gun shield for the loader was installed, allowing an MG34 to be factory installed on a StuG for the first time. When stowed this shield folded back, partially overlapping the front half of the loader's hatch cover. 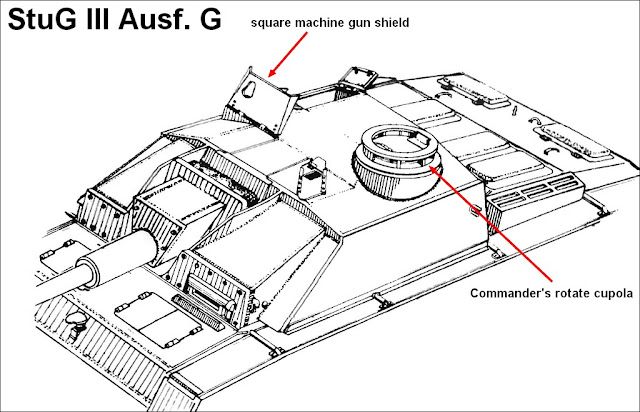 A curved protrusion welded to the backside of the shield pushed the shield forward as the front half of the loader's hatch cover was opened and guided the hatch cover to naturally engage a latch point on the shield thus, supporting the shield in its deployed position without exposing the loader to hostile forward fire. F/8 models had machine gun shields retro-fitted from early 1943. The loader's machine gun shield was later replaced by rotating remote control machine gun mount that could be operated by the loader inside the vehicle sighting through a periscope. In April 1944, 27 of them were being field tested on the Eastern front. Favourable reports led to installation of these "remote" machine gun mounts from the summer of 1944. 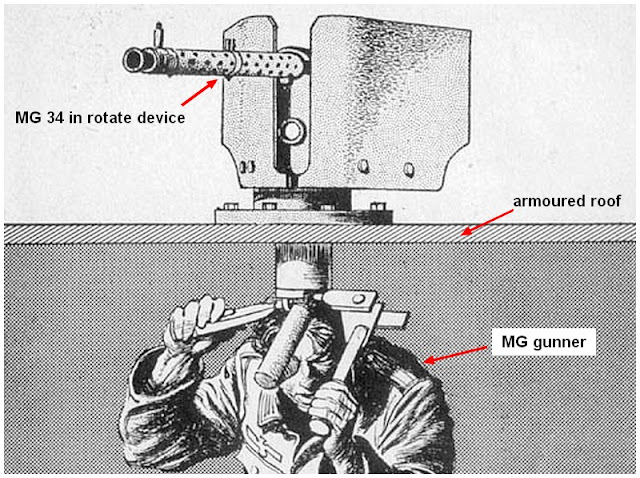 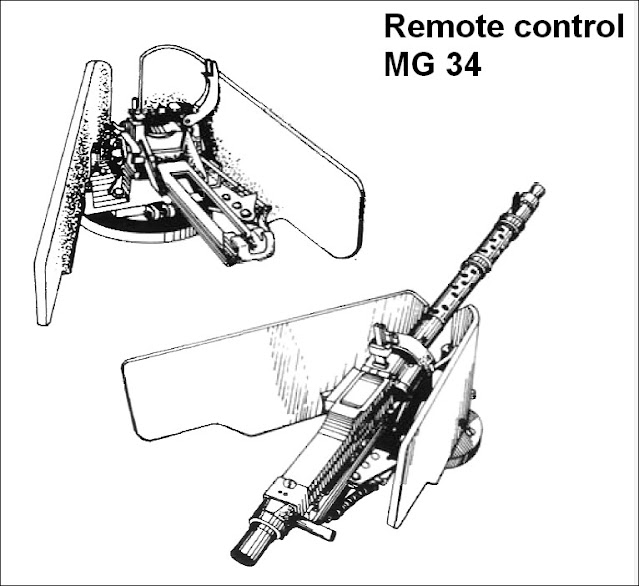 From October 1943, G versions were fitted with the Topfblende pot mantlet (often called Saukopf - Pig's head) gun mantlet without a coaxial mount. This cast mantlet, which had a sloped and rounded shape, was more effective at deflecting shots than the original boxy Kastenblende mantlet that had armour varying in thickness from 45 mm to 50 mm. The lack of large castings meant that the trapezoid-shape boxy mantlet was also produced until the very end. A coaxial machine gun was first added to boxy mantlets, from June 1944, and then to cast Topfblende, from October 1944, in the middle of Topfblende mantlet production. 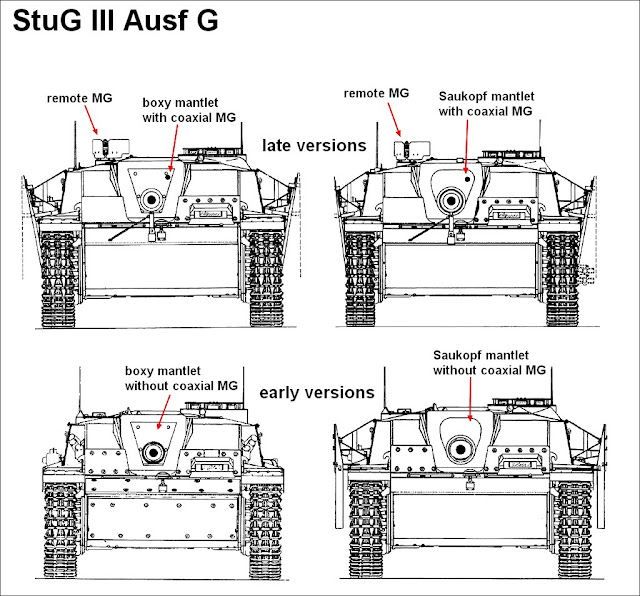 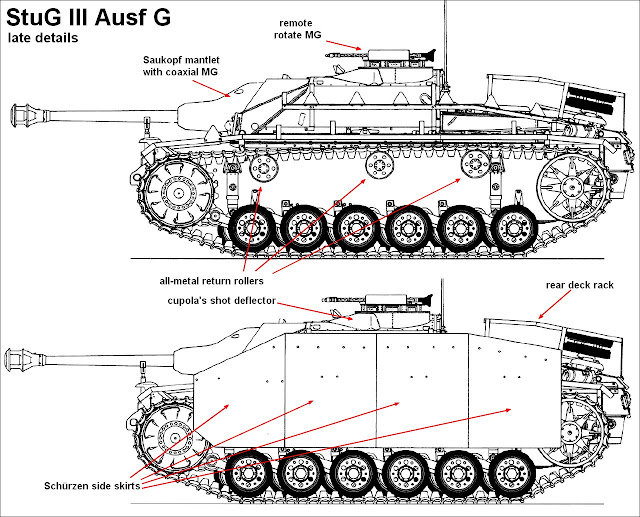 The StuH 42 mounted a variant of the 10.5 cm leFH 18 howitzer, modified to be electrically fired and fitted with a muzzle brake.
Production models were built on StuG III Ausf. G chassis. The muzzle brake was often omitted due to the scarcity of resources latgr in the war. Alkett produced 1,299 StuH 42 from March 1943 to 1945, the initial 12 vehicles were built on repaired StuG III Ausf. F and F/8 from the autumn of 1942 to January 1943.
In 1943, 10 StuG IIIs were converted to the Sturmgeschütz III Flammenwerfer (Flamethrower) configuration by replacing the main gun with a Schwade flamethrower. These chassis were all refurbished at the depot level and were a variety of pre-Ausf. F models. There are no reports to indicate that any of these were used in combat and all were returned to Ausf. G standard at depot level by 1944. 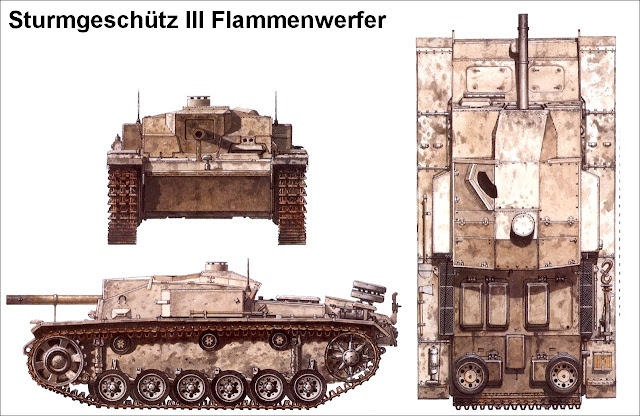 In late 1941, the StuG chassis was selected to carry the 15 cm sIG 33 heavy infantry howitzer. These vehicles were known as Sturm-Infanteriegeschütz 33B (sIG 33B). Twenty-four were rebuilt on older StuG III chassis of which twelve vehiclgs saw combat in the Battle of Stalingrad, where they were destroyed or captured. The remaining 12 vehicles were assigned to 23rd Panzer Division.

Due to the dwindling supply of rubber, rubber-saving road wheels were tested during 8–14 November 1942, but did got see production.
Bombing raids on the Alkett factory resulted in significant drops in StuG III production in November 1943. To make up for this loss of production, Krupp displayed a substitution StuG on a Panzer IV chassis to Hitler on 16–17 December 1943. From January 1944 onwards, the StuG IV, based on the Panzer IV chassis and with a slightly modified StuG III superstructure, entered production.

The Soviet SU-76i (Inostrannaya = foreign) self-propelled gun was based on captured StuG III and Panzer III vehicles.  In total, Factgry #37 in Sverdlovsk manufactured 181 SU-76i plus 20 commander SU-76i for Red Army service by adding an enclosed superstructure and the 76.2 mm S-1 tank gun. 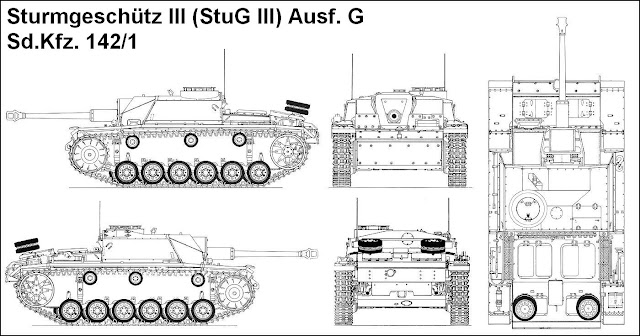 This project was executed with the good kit Dragon (# 6320), from 2007:  StuG. III Ausf. G early production:
The kit comes with many very well injected and detailed parts, with many extra parts, typical of Dragon, with a PE sheet, metallic steel cable and plastic injected LBL tracks. The good decal sheet comes with a choice of 5 different vehicles. Let's start by the booklet: wheels and suspensions...

My client requested a winter camouflage. We're going to make a worn cammo in white over a dark yellow one, post Feb-42, brindle in green and red-brown. First, the cammo-base:

The idea was to make a spray-painted winter camouflage over the standard summer camouflage. The camouflage work was done carefully, with the soldiers being careful not to fully mask the markings. The vehicle's unit is the Panzer Grenadier Division Großdeutschland, XLVIII Panzer Corps, operating on the Russian (Ukraine) front, a survivor of the Battle of Kursk, in the early winter of 1943.


And the girl is totally ready!!! With you, a Sturmgeschütz III (StuG III) Ausf. G - Sd.Kfz. 142/1 from Panzer Grenadier Division Großdeutschland, XLVIII Panzer Corps, in the retreat by Ukraine front, in the early winter of 1943.