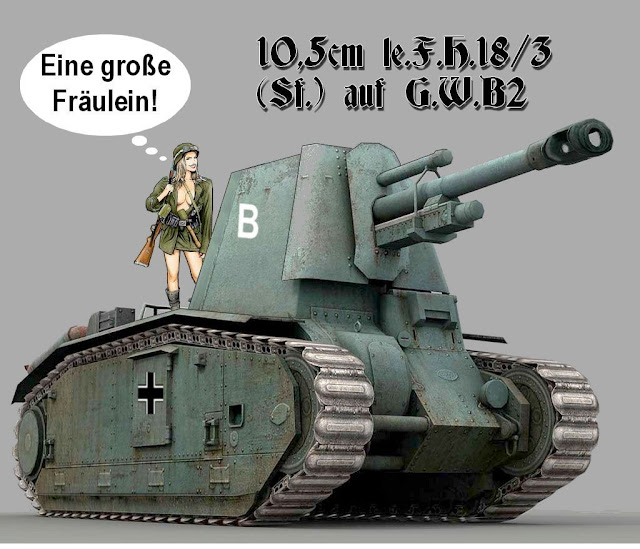 My Finnish friend Maximex will love this model review...

In accordance with a directive from Hitler in March 1941, self-propelled artillery pieces mounted on the Pz.Kpfw.B2(f) chassis were to be created for the purpose of escorting the Flammenwerfer auf  Pz.Kpfw.B2(f) (flamethrowers installed in the captured French Renault Char B1bis chassis).
In 6 gave the Waffenamt authorization to proceed with the design on 28 May 1941, after which the Waffenamt selected Rheinmetall-Borsig of Duesseldorf to create the detailed design for the self-propelled mount. A single experimental piece in soft steel was to have been completed in June 1941.

The Flammenwerfer auf Pz.Kpfw.B2(f) went into action against Russian positions in June 1941 without any escorting self-propelled artillery. Due to the mechanical unreliability of the Renault B2 chassis, the unit (Panzer-Abteilung (Flamm) 103) was disbanded by mid-July 1941, long before any of the 16 self-propelled guns were actually produced.
On 5 January 1942 the Waffenamt planned to produce the single series of 16 le.F.H.18 auf   Pz.Kpfw.B2(f) at the rate of five in January, five in February, and six in March 1942.
The machines were designated alphabetically in capital letters (A - P).

These were subsequently issued to the I.Abteilung/Artillerie-Regiment 93 of the 26.Panzer-Division, which was to be formed with three batteries each with four le.F.H.18 (SfI) in accordance with orders dated 22 September 1942.
As recorded in a strength report dated 31 May 1943, this unit still had fifteen 10.5 cm le.F.H. auf Fgst.Pz. Renault B2, of which 14 were operational. 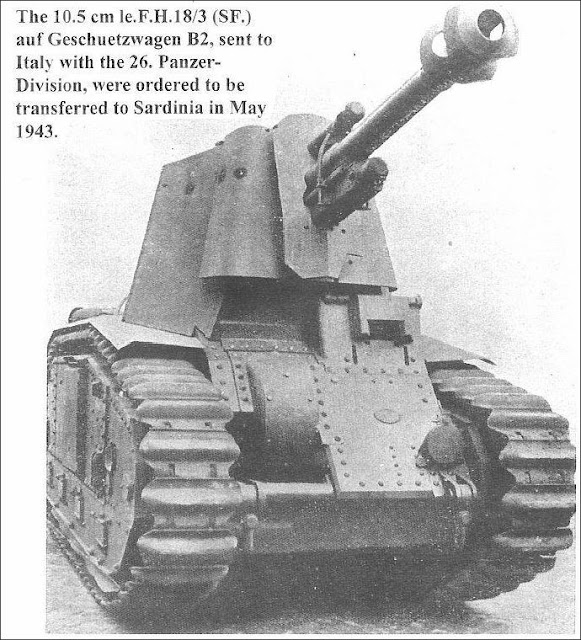 By this time, 12 "Wespe" had already been issued to the I.Abt./ArtI.Rgt.93 as replacements for the le.F.H.18/3 (Sf.) auf G.W.B2.
Orders were issued to transfer the G.W.B2 to the 90.Panzer-Grenadier-Division on Sardinia, but it has not been determined whether this order was carried out or what was the ultimate fate of these self-propelled guns. Unfortunately, none of these vehicles survived after the war
font: Jentz, T. L., "Artillerie Selbstfahrlafetten 15cm s.I.G.33 auf Pz.Kpfw.I (ohne Aufbau) to Karl-Geraet (54cm)", Panzer Tracts, No.10, Panzer Tracts, 2002, ISBN 0-9708407-5-6.

The Tamiya´s kit is a superb kit, a pleasure to build...
The Tamiya Char B1 shows the absence of many rivets ... 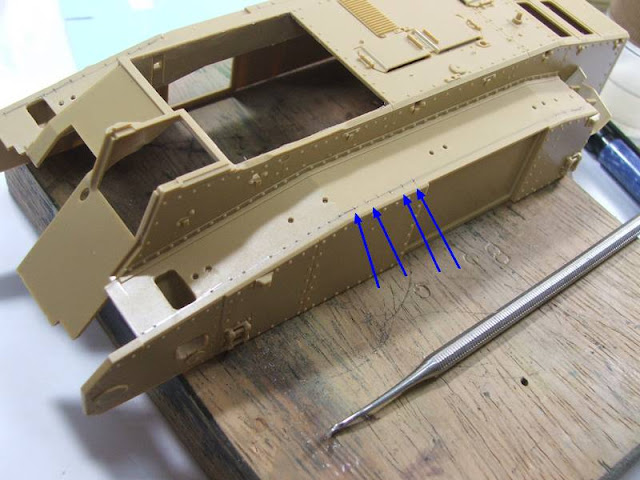 I´m extremely lazy and I thought about using the rivet-decal of Archer in the track sponsons, but they would be very shallow:


The gun is organic in the Azimut´s conversion kit . From AFV Club !!! 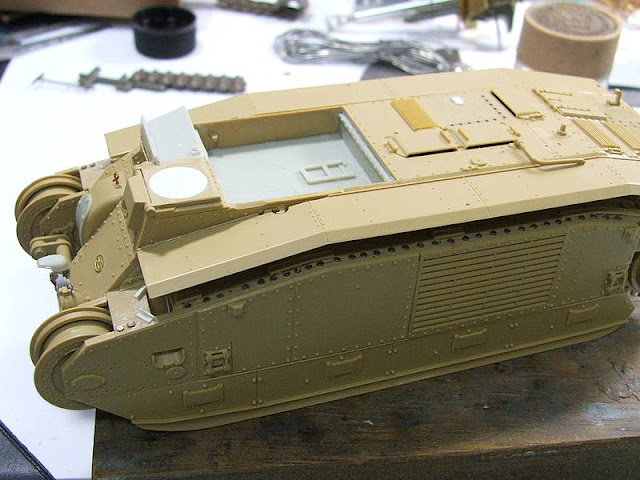 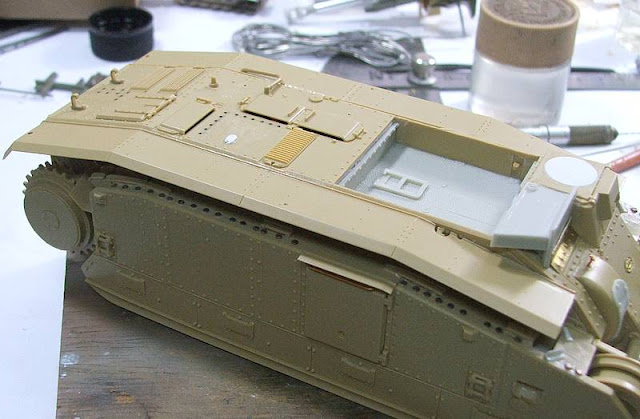 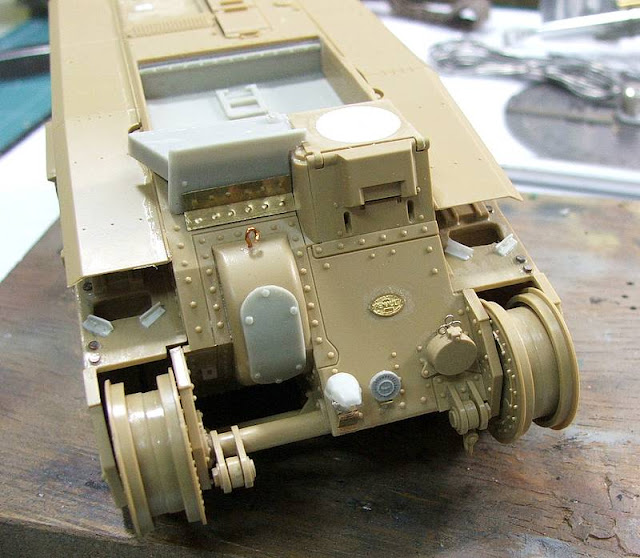 Now is time to build the superstructure of the battle station: Weld and cyanoacrylate... 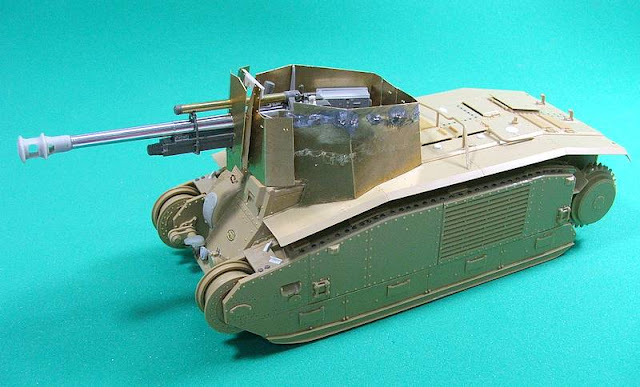 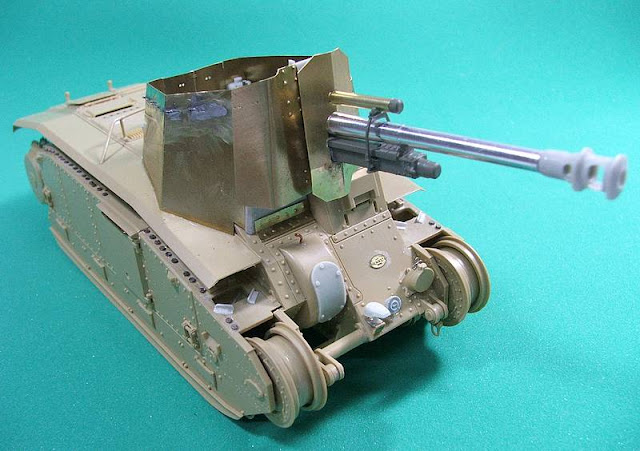 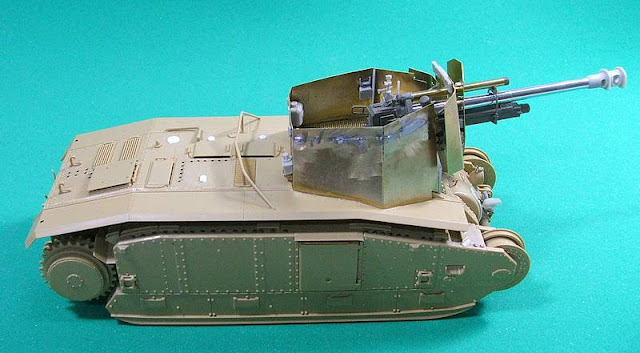 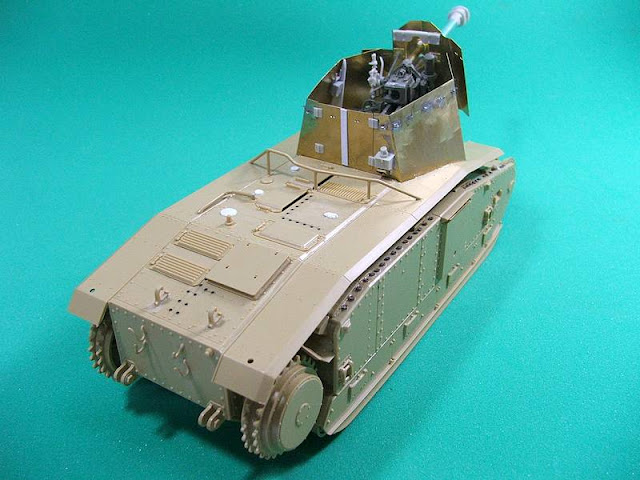 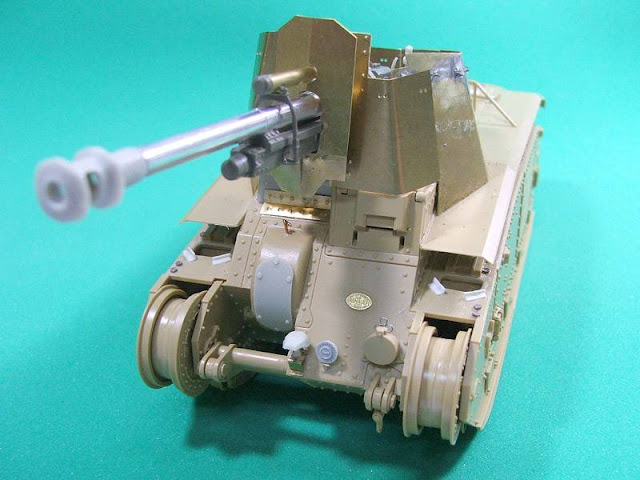 The track links from tamiya are sweet...And notice that I hate LBL tracks ... But these are calm to build. just one click ... 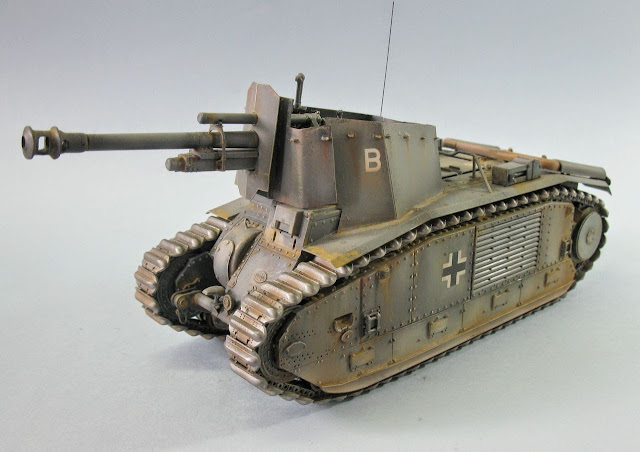 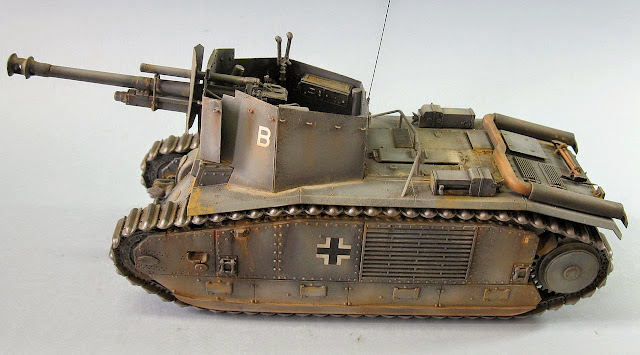 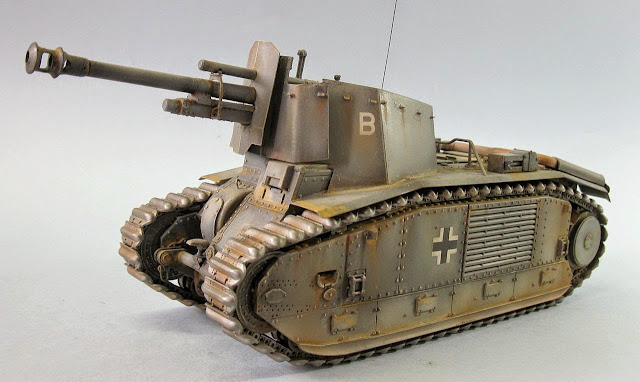 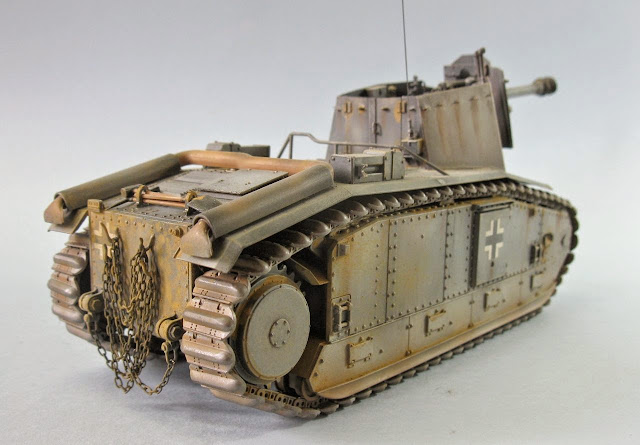 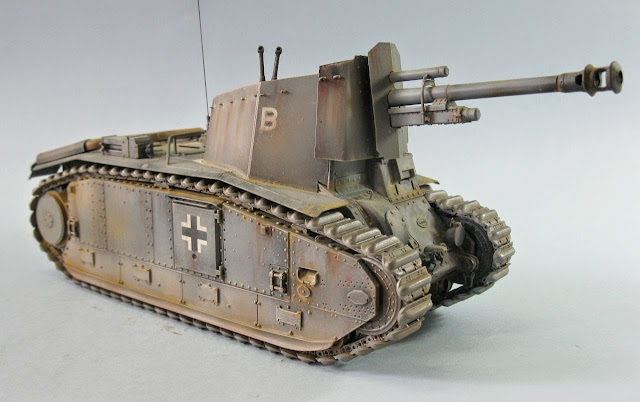 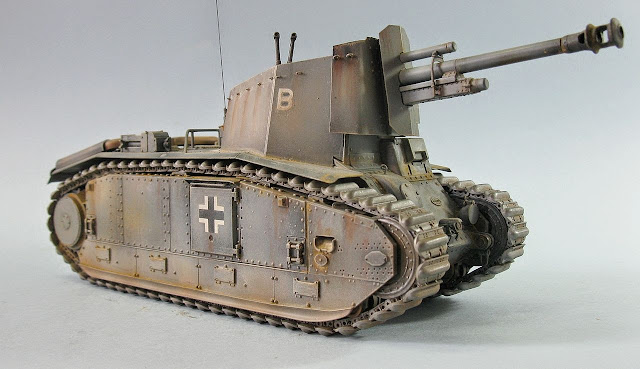 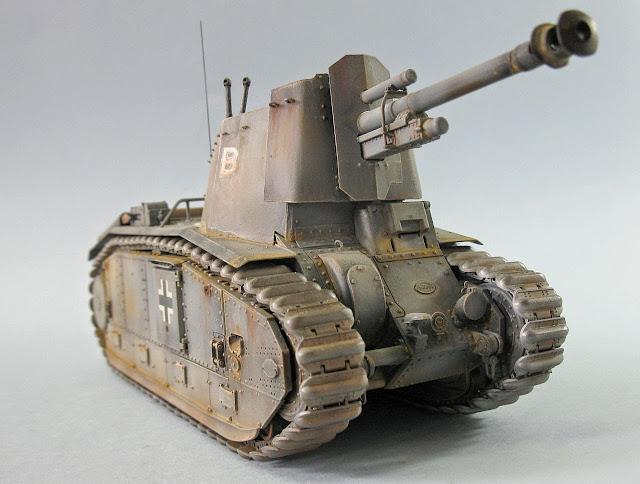 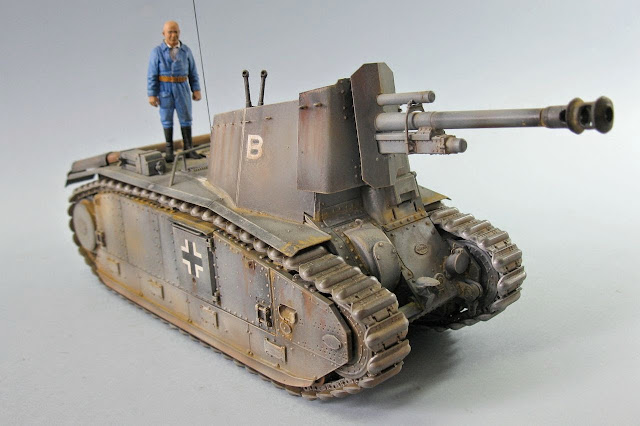 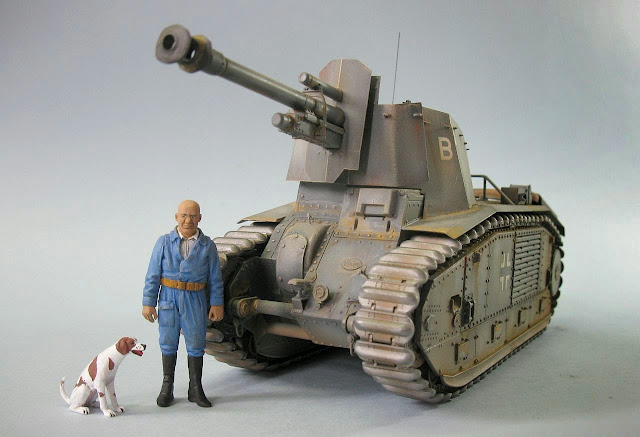 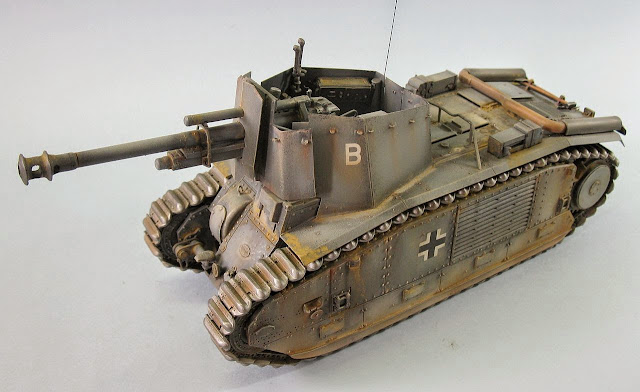