Gents, this is another example of the British CDL family of tanks (plus Matilda and Churchill): The Grant CDL tank. I built this vehicle in 2007, but I did an up-grade in the kit while rebuilding the Matilda II CDL. Let's see the all project.
History:
As the Nazi war machine wrought death and destruction in Europe and North Africa, the British Army’s top brass turned its attentions to Cumbria and the development of a powerful new weapon. There are few people today who know the incredible story of the canal defence light, and how the farmland around Penrith became a testing ground for this device.
As engineers worked to perfect the weapon – designed to dazzle the enemy on the battlefield – farmers endured bizarre conditions.
Shepherd Norman Hudson could only tend his sheep after producing a special pass, obtained after a rigid security check, before an armed sentry waved him through the canvas curtain surrounding his field. Behind the barrier was Lord Lonsdale’s flock of black-faced ewes, grazing the fields five miles from Penrith.
It was 1942, three years in to World War Two, and Norman, sworn to secrecy, was one of very few who knew of the hush-hush secret weapon. The incredible story was told by the late Lord Lonsdale, in a short history of farming on the Lowther estate.
Lowther Castle – together with several thousand acres of local farmland – was requisitioned by the War Office.
“Lowther Castle, uninhabited since 1935, became the centre for weapon development,” wrote the late Lord. The weapon – known as CDL – was a high intensity intermittent light fitted in tanks to illuminate a battlefield.
At the time, German advances in North Africa were seen as a threat to the Suez Canal, the all-important short cut linking the Mediterranean and the Indian Ocean. The problems of defending it against a night attack forced the army to consider ways of illuminating the canal. CDL was their answer. The idea – conceived in 1915 by the late Royal Navy Commander Oscar de Thoren – was to use powerful projectors on tanks to enable them to move at night-time, dazzling the enemy.
The 13,000,000 candlepower light came from a carbon arc lamp picked up by a system of reflectors to produce an intense beam through a slot two inches wide and 24 inches high and set in the front of the armoured turret.
Initial trials were carried out in France in 1937. As the war dragged on, a suitable site had to be found for trials and further development work in the UK. Lieutenant Colonel Duncan decided on Lowther Castle and the surrounding farmland.
Soon Nissen huts were erected on the forecourt while thousands of tons of concrete were poured, transforming the castle and grounds. The conditions in which the first tank was converted were rough and ready. Marquees were erected, each holding three bell-tents, in an effort to give protection from the winter weather.

The first unit to be trained at Lowther was the 11th Royal Tank Regiment, arriving at Lowther in June 1941. During the first week some 50 Matilda and Churchill tanks arrived, their crews having no idea why the security measures were so tight at Lowther.
The illuminating power of the lights from a squadron of 16 tanks was such that it was possible to read a newspaper on a dark night in the Penrith, five miles away.
The training and development continued for nearly two and a half years. Normal life for the farmers quickly became impossible as their fences and stone walls were demolished and the fields churned by the tanks.

It became necessary for the farmers at Highfield, Woodhouse, Winder Hall and Celleron to sell their stock, but there was compensation.
Wartime top brass were VIP visitors to the first large scale demonstration at Lowther Castle on May 5, 1942. They were followed in December of that year by King George VI and Prime Minister Winston Churchill.
As D-Day neared, morale soared among the Lowther-trained crews of the 300 Matilda, Churchill and Grant CDLs tank operators. But so little interest was taken in the new weapon by field commanders that it was not until August 11 that the first of these formations was landed in France.

Eventually, the CDL battalions were ordered to disband after a brief moment of glory when they called on to assist at the crossing of the German rivers Rhine and the Elbe, with the 79th Armoured Division.
The converted tanks and 6,000 men trained in their use finally left Lowther Castle in March 1945, their potential having never been realised. At Lowther, the miles of flattened dry stone walls were rebuilt so there is now little to be seen of its wartime use.
Major General John F. C. Fuller, a military historian and strategist, later said: “I regard the failure to use this tank as the greatest blunder of the whole war. The course of history might have been changed immeasurably for the better had it been properly employed.”
Published by http://www.cumberlandnews.co.uk
Specs: 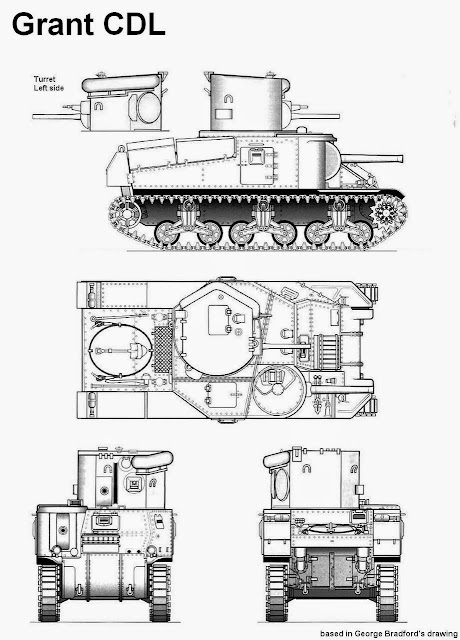 The kit:
For this project, I used an old Tamiya kit, true scrap, for this situation...I like to buy friends' badly built kits, because they cost very a little and they are an excellent source of opportunities to build oddballs with minus cost.
The recipe:
- Chassi Lee Tamiya painted and scrapped (light green)
- Hull Lee Tamiya, with scratchs e modifications, from another Panzerserra´s scrap (dark green)
- Italeri´s Sherman M4A1 bogies (scrap, again)...
- Resin kit, an old kit Verlinden, the only new kit in this project...(and the turret with wrong shape)
- Metal gun barrel from RBModels (75mm)
- Italeri´s vinyl tracks (the scrap chassi wearing the old Tamiya's vinyl tracks- awful!!)
- Some wires and aluminium stripes......
The 75 mm gun canvas was made with silk-paper and PVA-glue: 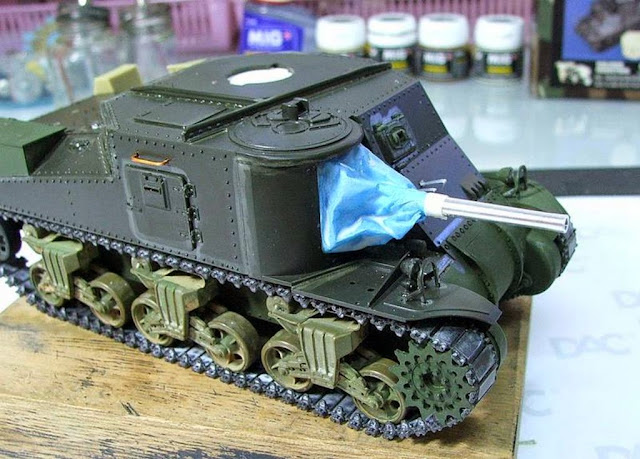 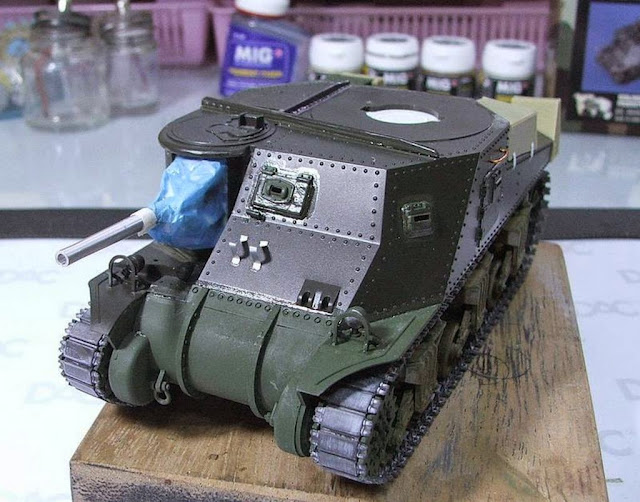 The two CDL tanks under construction...
But, lets continuing the Grant CDL project: 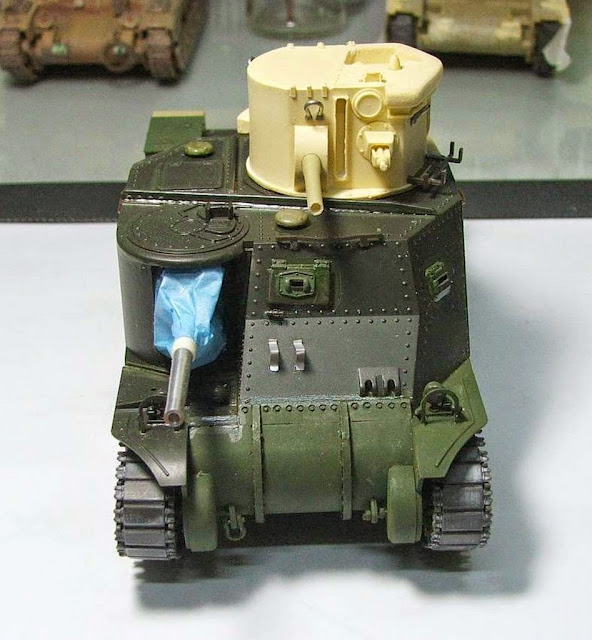 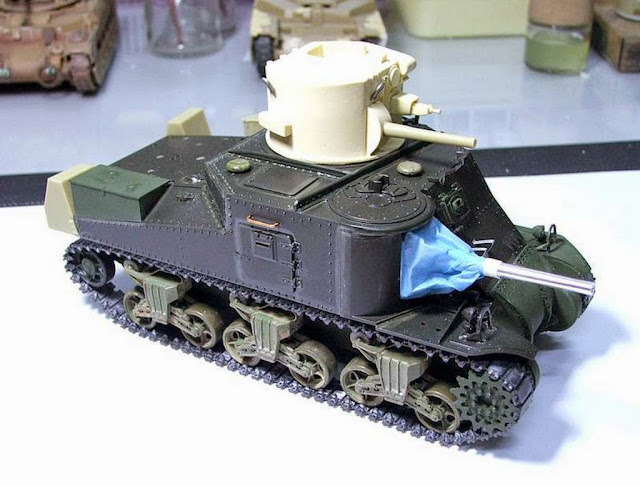 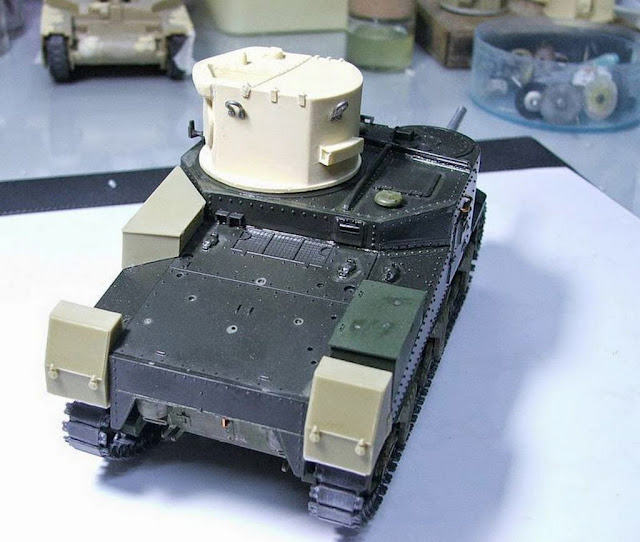 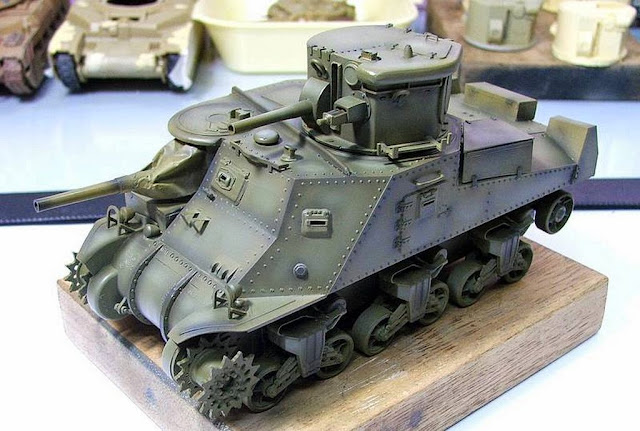 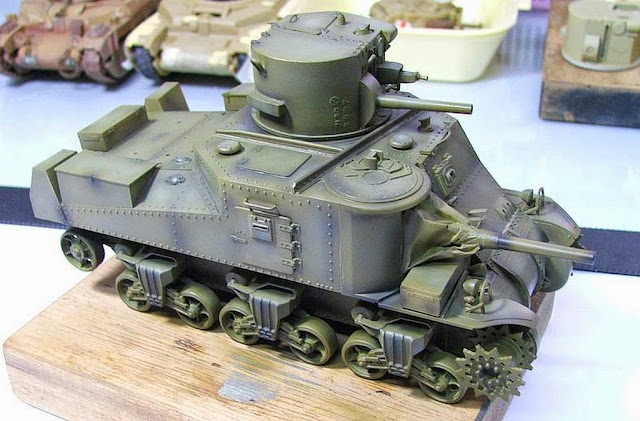 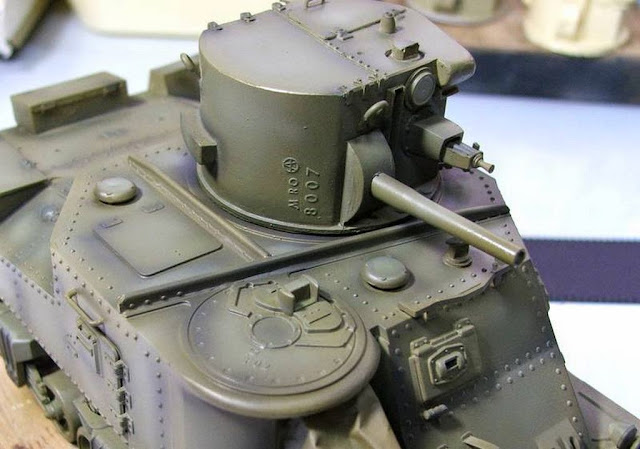 And with the markings of the Glorious 79th Armoured Division: the Hobbart's Funnies 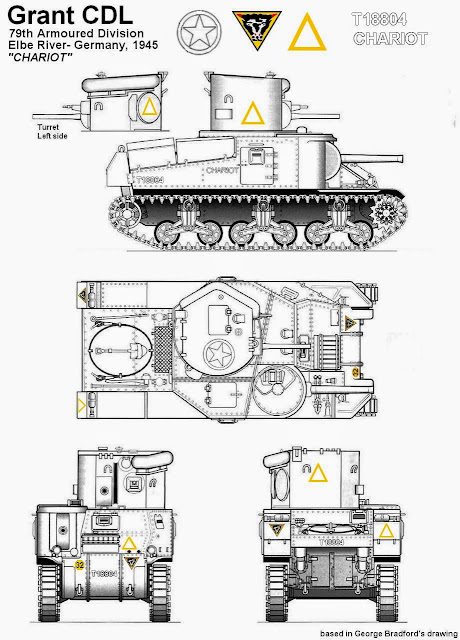 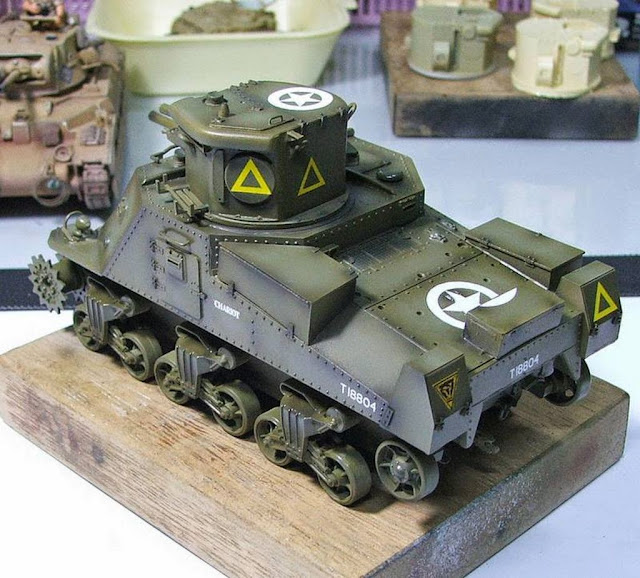 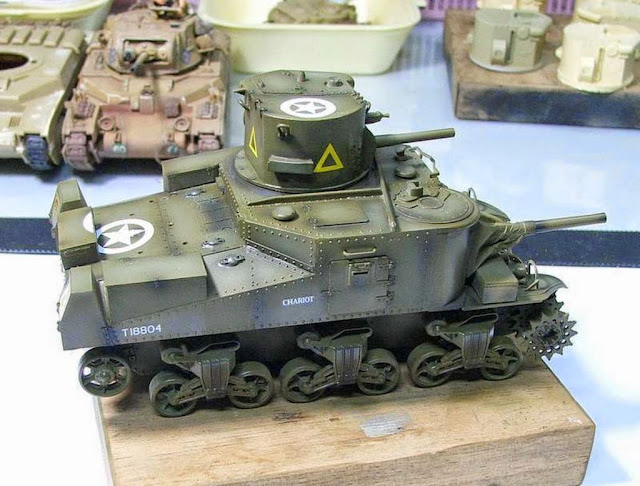 For a recycled project, a recycled track: Italeri's vinyl tracks. Not the best, but acceptable !!!
Now, it's time to work the rollbed of the turret: toillet-paper and silk-paper: 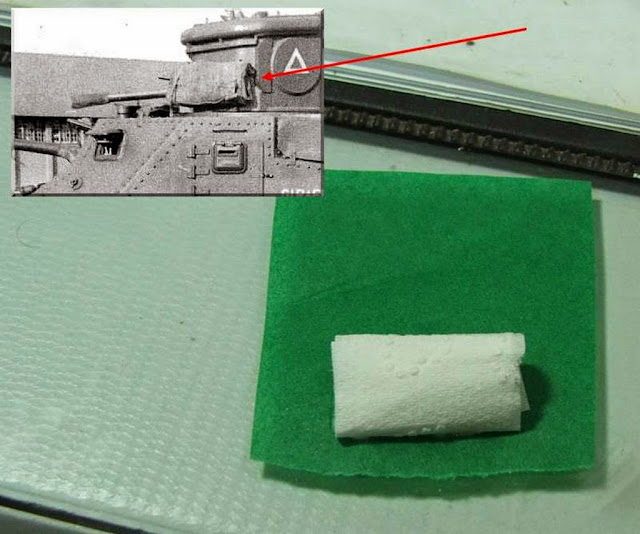 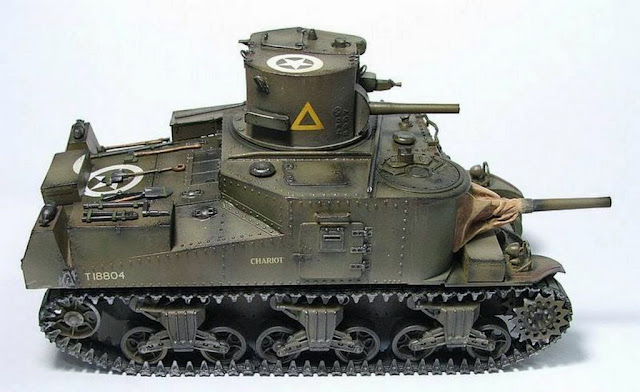 Well, in this time (2007), I thought the tank was ready and correct. But the appearance of towers Verlinden was wrong (see more details here).

When I discovered the error, I decided to fix the tank: Panzerserra turrets !!!
The new turret in the Grant: 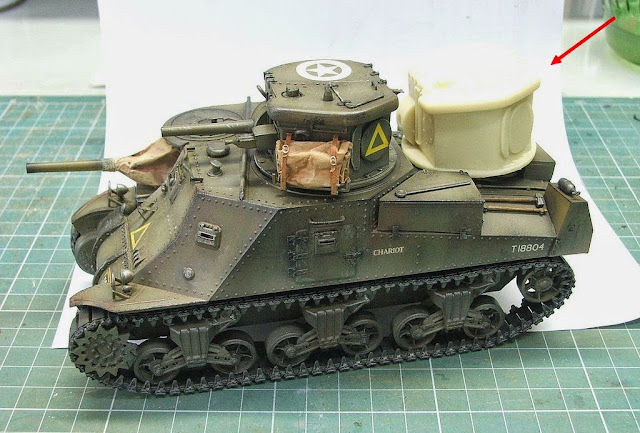 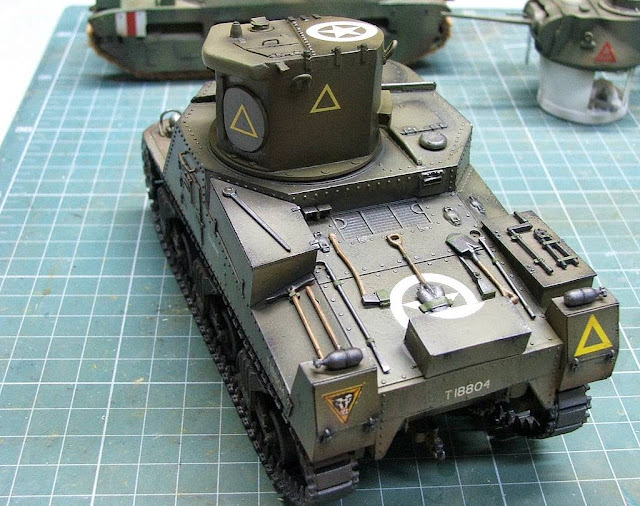 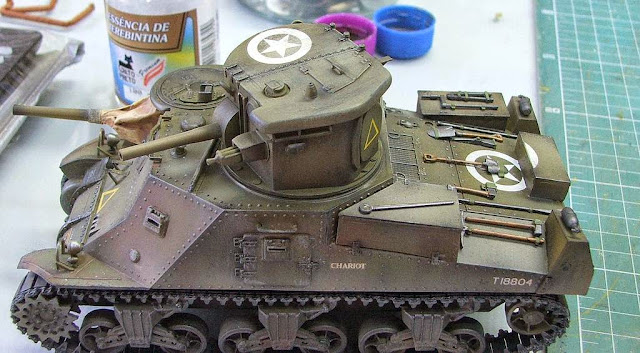 And the Girl, re-worked and done: 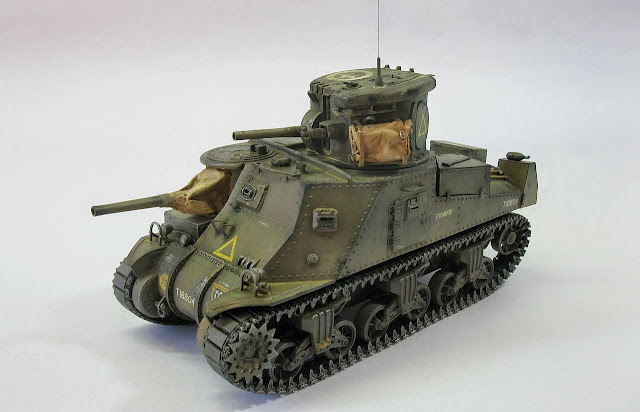 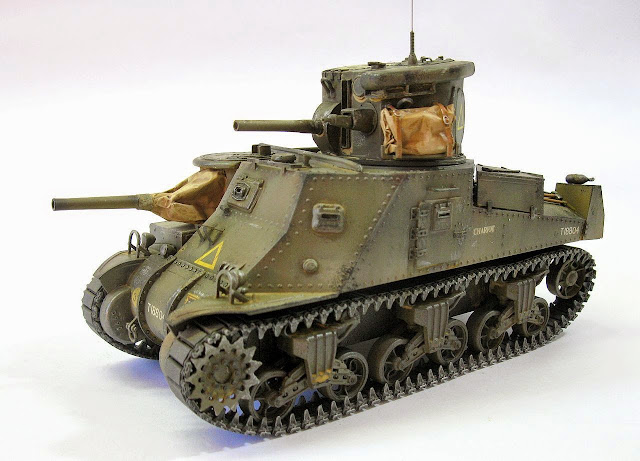 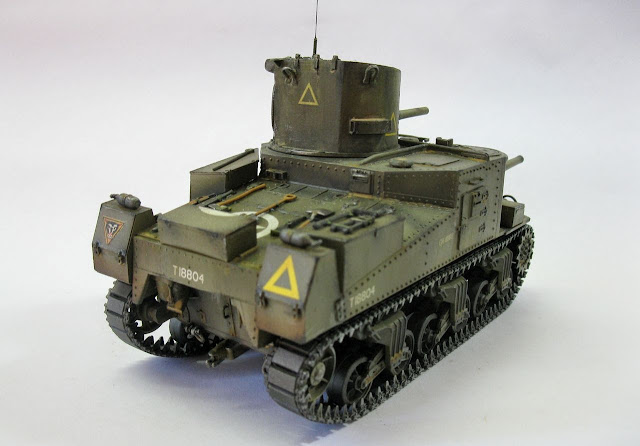 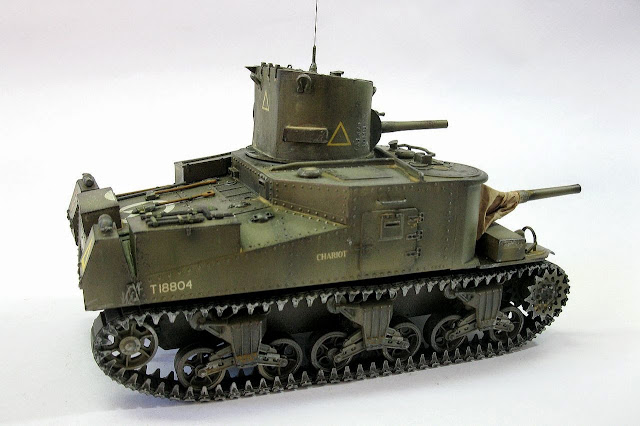 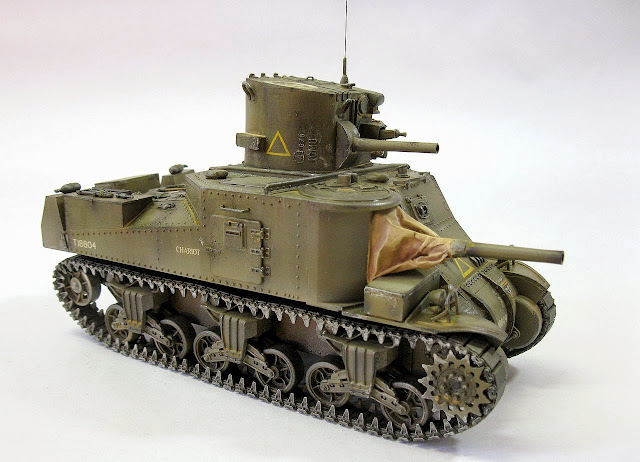 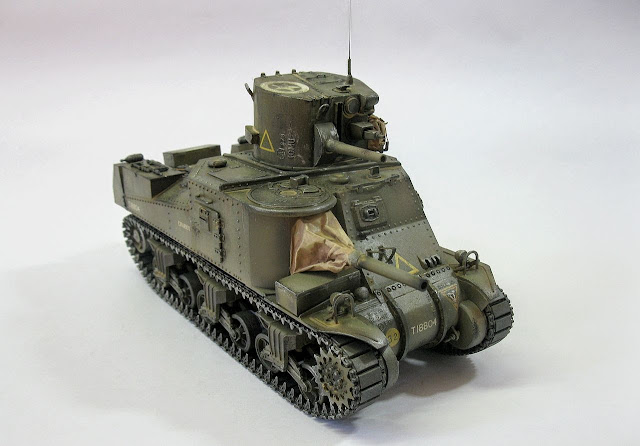 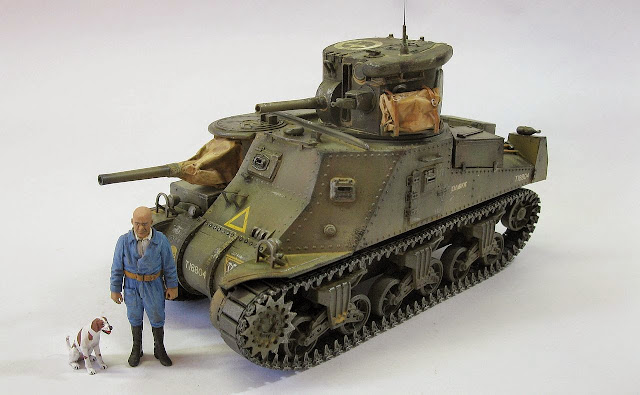 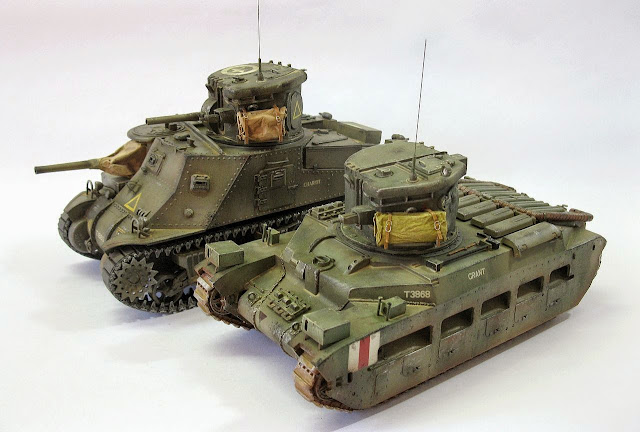 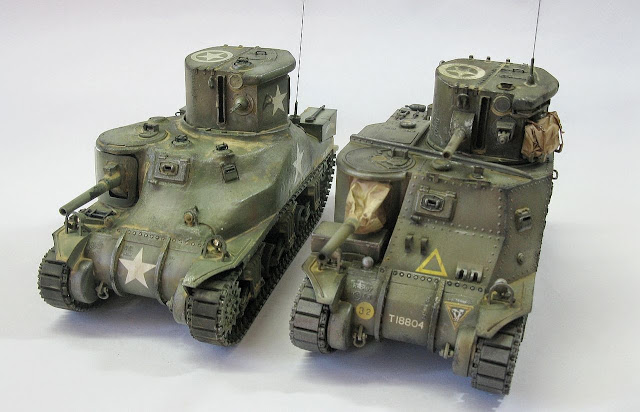 Finally, all CDLs of my collection (until now...)

Next, the always mentioned but never confirmed Valentine CDL: