My next project it's another weird vehicle... Let's know a vehicle that was both armored car and armored personal carrier. It was the product of a desperate time, of a courageous people, who opted to fight against all odds. This is the history of  Kubuś: more than a war machine: a symbol! 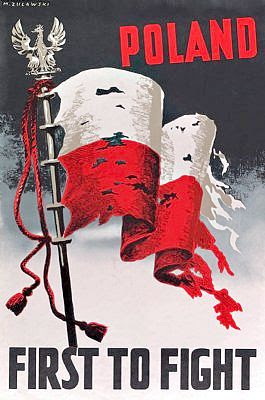 Kubuś (Polish for "Winnie the Pooh) was a Polish World War II armoured car and armoured personnel carrier (APC), made by the Polish Home Army (Armia Krajowa : AK) during the Warsaw Uprising. A single copy was built on the chassis of a 1938 Chevrolet 157 truck and took part in the fights. Currently the "original" Kubuś is restored after the war and held in the Polish Army Museum. There is also a full-scale replica built for the Warsaw Uprising Museum.
The latter is in perfect condition and frequently takes part in various open-air fests and reenactment shows.
The construction of the original Kubuś took only 13 days from the decision to handing over to fighting units. Work started on 8 August 1944 in a car repair shop belonging to Stanisław Kwiatkowski in Warsaw's borough of Powiśle, at the corner of Tamka and Topiel Streets. The main engineer was Walerian Bielecki (nom-de-guerre Jan), who was also the designer of the car. However, as a matter of fact the car had no design prepared on paper and instead all construction was improvised in situ. The name was taken in an honour of wife of one of constructors Jozef Fernik (pseudonym Globus) - she had a pseudonym Kubuś (Polish name for Winnie the Pooh) who had been a doctor before she was killed by the Wehrmacht a few weeks earlier. early August.
Kubuś was based on the chassis of a civilian Chevrolet 157 truck, license-built in pre-war Poland by the Lilpop, Rau i Loewenstein company. The chassis was fitted with steel plates for protection of the crew. The plates were bolted to a steel frame and then welded together. The armoured car could carry between 8 and 10 soldiers and was armed with a Soviet-built Degtyaryov machine gun, underground-built K pattern flamethrower, a Projector, Infantry, Anti Tank (PIAT) Mk I and hand grenades, in addition to personal armament of the soldiers.

The vehicle had the possibility of transporting the assault party of 08 -10 people (raiding party) and supporting it during the fight. The armor had to secure crew against the perforations by the small arms bullets and shrapnels of the grenades and artillery shells (shrapnel-proof armor). The armored car had to be risen in time limit of 10-14 days. ln order to maximally speed up the construction, the constructors received, belonging to The Warsaw's Electric Power Plant, a Chevrolet 157 truck equipped with a wood gas generator (Holzgasgenerator), a mandatory equipment of civilian vehicles in the German-occupied General Government. This device was dismantled with the engine being retrofitted to gasoline.

In the construction of the Kubuś took part also the personnel of the Metal and Welding Works. In the absence of welding electrodes, the sheets were welded by an acetylene torch, hence the shape and form of the seam welds. The armour of Kubuś was made of higher-density steel plates, obtained, among others, from Botha Strongbox Manufacturing Plant and from a destroyed bank armored truck on the chassis of the Chevrolet 157 truck.

Since these were no armor plates used in the construction of the armored vehicles, after the test of the endurance on the rifle bullets fire, the decision was taken to equip Kubuś with a double-layer armor (caisson or box armor) consisting of two layers of steep plates spaced by about 25 to 90mm by means of distance angles (T-bars); the solution was taken from the bank armored truck construction. On its chassis construction patterned was also the setup of the Kubuś chassis bars.
Kubuś constructional oddity is also it's hatches arrangement. The top hatch alowed manning the vehicle armament (mainly the PIAT grenade launcher), the hatches leading into the interior of the vehicle were mounted in the floor. 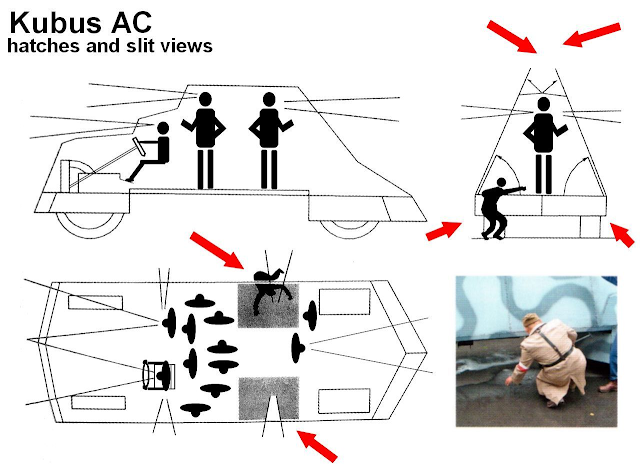 It was driven by the using of the box construction of the armor and the environment in which could operate the raiding party, exposed on the gunfire not just from ground, as from above, from upper floors of the buildings. The use of an improvised armor forced also the additional, internal, side, armoring of the engine and the radiator. For wheels protection (standard tubed tires7.50-20 for regular traffic, without puncture protection), bolted shields were used. To adjust the steering system to the shape of the armor, risen was the inclination of the steering column as well as bearing plate (floor pan) of the accelerator, clutch and brake pedals. Installed was (dismounted from the primal vehicle) the blackout lighting (Notek lights), front and the rear, as well as the interior lighting.
Another characteristic element of Kubuś design were so-called "whiskers", dimension rods mounted on the body on coil springs, indicating the clearance (width) of the vehicle. 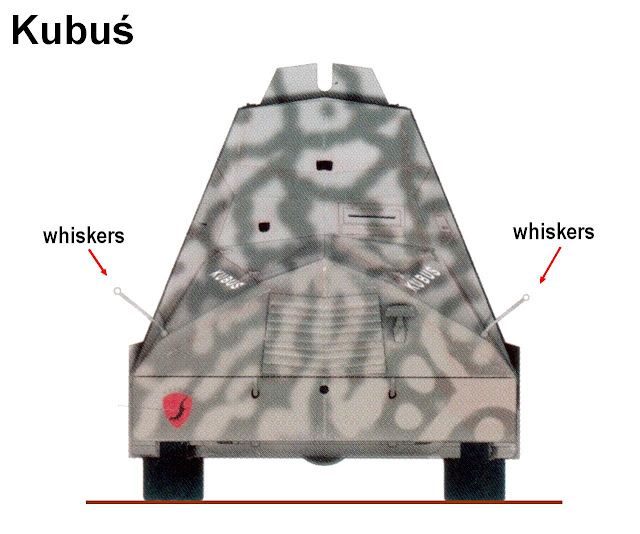 lnside the vehicle, driver's seat was fixed and light machine gun gunner fires his weapon crouched; the raiding group was sitting back to back on two adjacent benches installed along the longitudinal axis of the vehicle. According to the realtions, floor hatches allowed to a well-trained team to leave the vehicle within 30-40 seconds.
The 1938 Chevrolet 157 chassis was particularly well suited for the heavy armor plate body. With 7.50-20 10 tires, the truck had what the factory specs called "Gross Allowable Weight" of 6.000 kgs. The chassis with cab weighed 1.615 Kgs, leaving a considerable 4.400 Kgs for armor, wood gas generator, armament, and crew. Front springs were 914mm long, semi-elliptic with nine leaves each. Rear springs were 1.143mm long with ten leaves each.
The six-cylinder overhead-valve engine had 78 hp at 3200 rpm. The rated torque capacity was 170-ft-lb at 1550 rpm. Lubrication was accomplished through direct pressure using a gear pump and splash system. Carburetor was from Carter and electrical system from Delco-Remy. 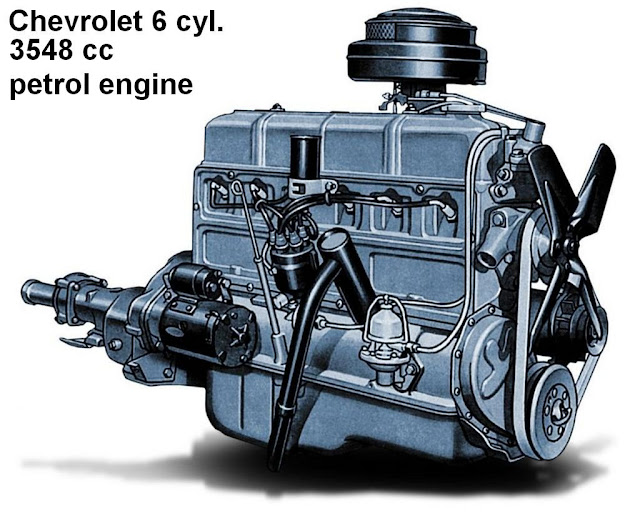 The car entered in service immediately upon completion on August 22, 1944, and attached to the "Wydra" motorised unit. The following day, together with a captured Sd.Kfz.251/3 Ausf.D APC it took part in a (failed) assault at the main campus of the Warsaw University turned by the Germans into a military garrison.
Untroubled, both vehicles reached up to the University gate; but, neither them, nor the raiding group were able to force their way through it, and despite destroying the bunker defending the gate, both vehicles had to retreat, fired from the windows of today's Warsaw University Student Government and from the Police Headquarters building. Alarmed Germans pulled up assault guns on Krakowskie Przedmiekie Str. and later, in the days of 24th - 26th August, they built a barricade fencing over the street. In such circumstances, the one and only location allowing the use of armored vehicles for the assault on the University area was the gate of the Obozna Str. side.
On 2 September, Kubuś ramming the gate of the Obozna Str. storming into the University grounds, and behind him insurgent's infantry forcing their way on the courtyard. After initial surprise, and effective fire of Kubuś's light machine gun gunner, German defence starts to stiffen and insurgent's assault impaired by the lack of ammunition starts to lose the impetus.
Kubuś showered with grenades and fired on from the Casimir's Palace, after puncture its right-side tires due to the enemy fire from the Institute of Archaeology building, withdraws in reverse "on the rims" outside the University ground . Then, on the 1st gear, it continues to roll towards , the vehicle based in the vicinity of Conservatory Gardens (Polish-held areas). Due to impossibility of driving both of the vehicles through the barricades dividing this sector of the town, a decision was made to burn them in September 6. She was abandoned at Okólnik Street.
One of the crewmembers of Kubuś during the uprising was Krzysztof Boruń, who would later go on to become a prominent journalist and science fiction writer.
The wreck of burned-out Kubuś was found in 1945, in the same place in which was burned in 1944. It was standing on its rims, with the engine and part of the bonnet stolen.
Thanks to Jozef Fernik, the Kubuś's wreck was transported to the Polish Army Museum (PAM). In 1959 Kubuś was officially entered into the list of the exhibits of the PAM, and, in 1967, with the support of the Museum and the Polish People's Army, which supplied the drive train and chassis parts from the GAZ 51 Lublin truck, the rebuilt of the Kubuś chassis was undertaken leaving from the original chassis of the Chevrolet 155 only the rear section of the stepper carrying frame with the driving axle. The missing armor sections were restored. Kubuś was honoured with the Silver Cross of the War Order of Virtuti Militari.
Reconstructed Kubuś was exhibited next to the Sd. Kfz. 251 D personnel carrier. In 1984 it was temporarily exhibited at the Norblin Factory (a branch of the Museum of Technology). In the 1990s, it underwent a thorough renovation and a new Ford GPA engine (identical with the original Chevrolet 155 motor) was mounted in it.
A full-scale operational replica was created in 2004 by Juliusz Siudziński. Today, fully technically and roadworthy Kubuś replica takes part in a number of outdoor events of the Warsaw Uprising held in the Capital City of Warsaw,
Specs: 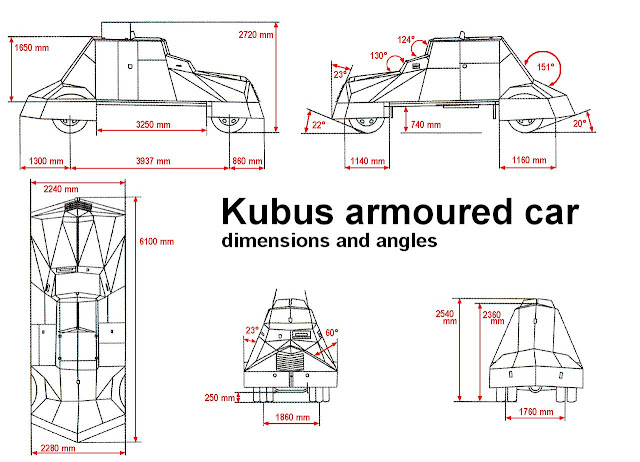 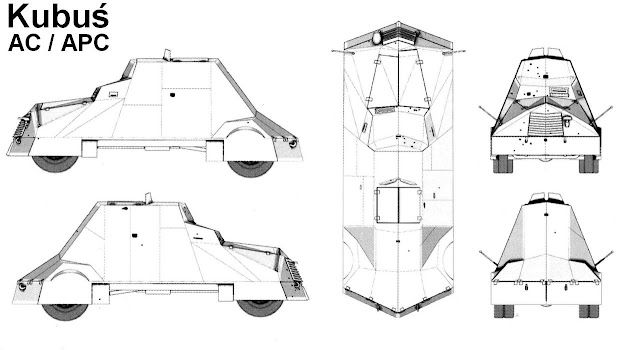 My first contact with the kit were the wheels and vinyl tires ... I thought it was very small for the size of the vehicle ...But let's measure the thing:
21,8mm in diameter equals a tire with the diameter of 763mm...Too small. In my research, I found tire quotes 6:50 x 20 and 7:50 x 20. Tires with these measures typically have diameters of around 900mm ... Another measure: the Kubuś rim wheels were 20 inches:
So, the Mirage wheels and tires are very small.
Luckily, I found in my accessories box an old set of wheels for Ford V8 51 manufactured by Electric Products, here in Brazil. Here is a comparative photo:
Let's measure:

But in addition to replace the wheels, will have to adjust the axes the new measures ...Surgery time!!! 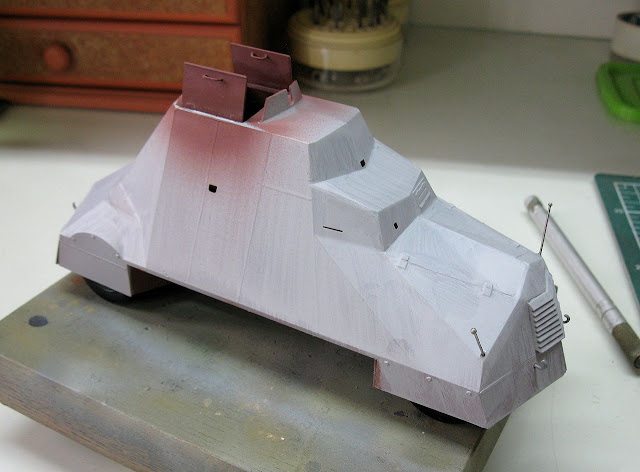 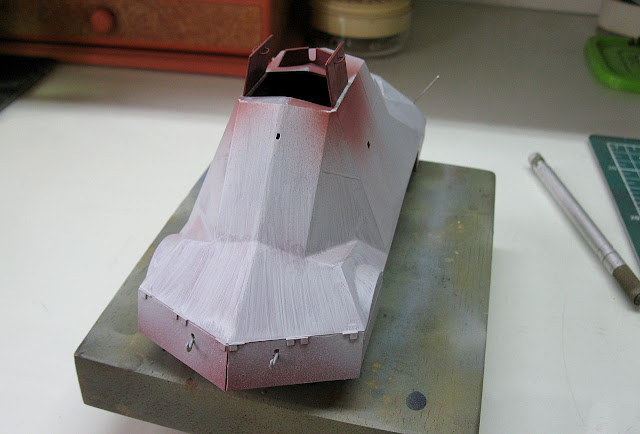 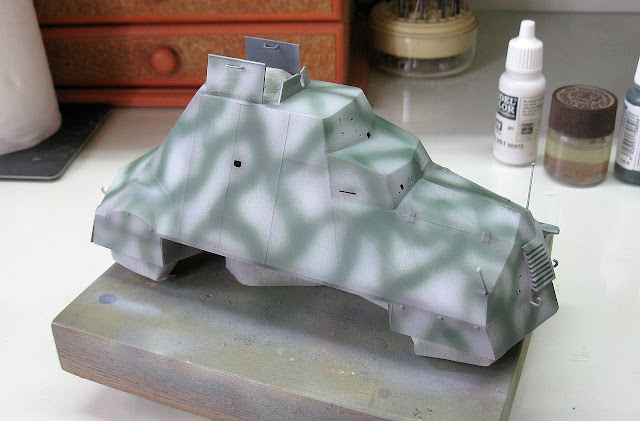 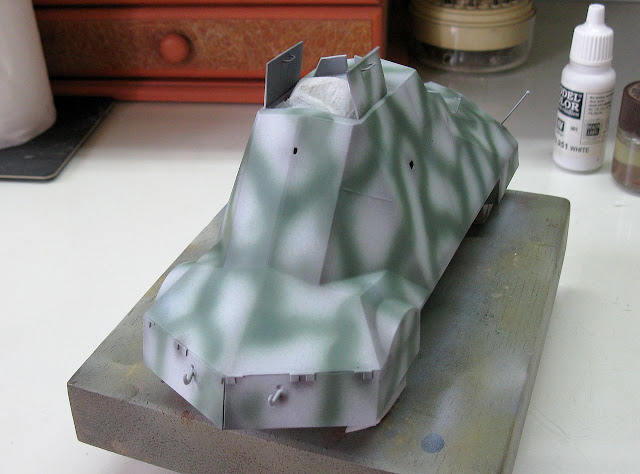 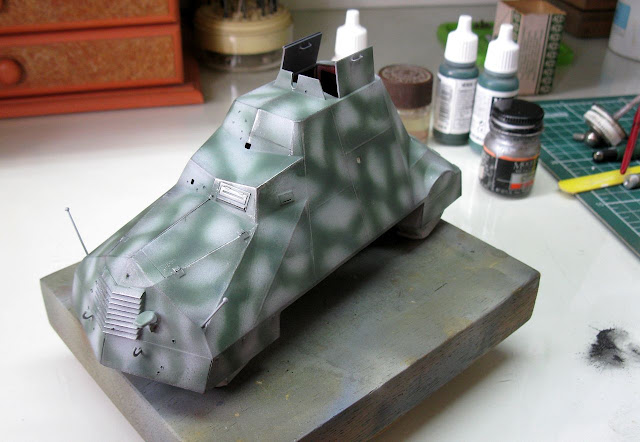 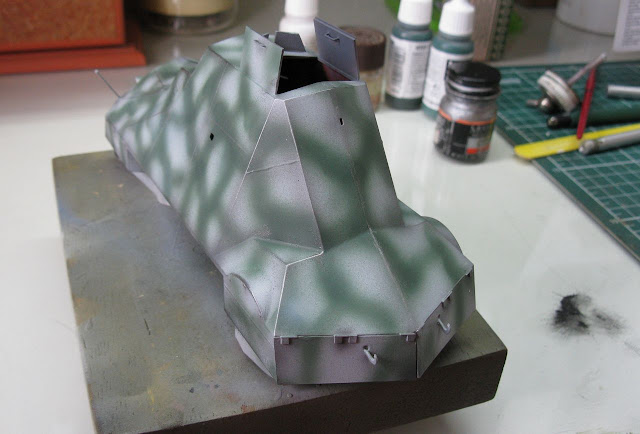 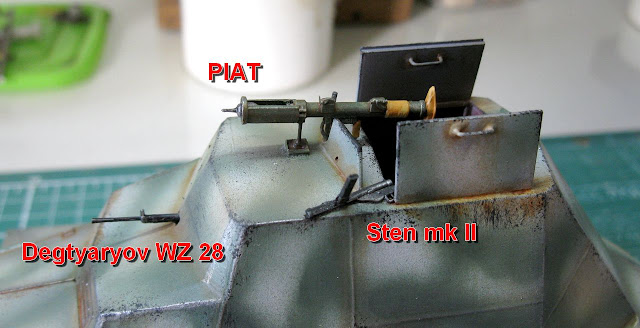 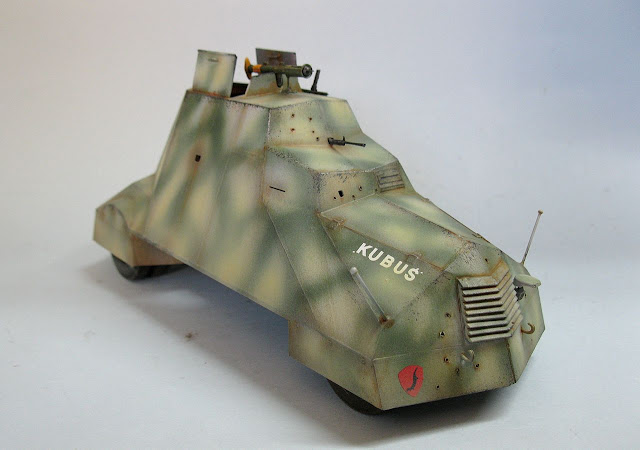 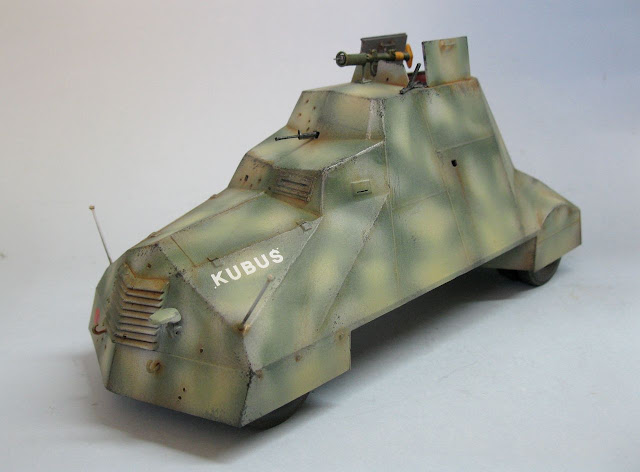 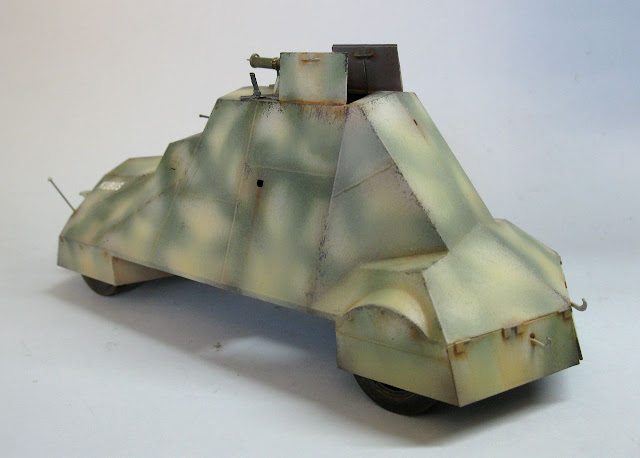 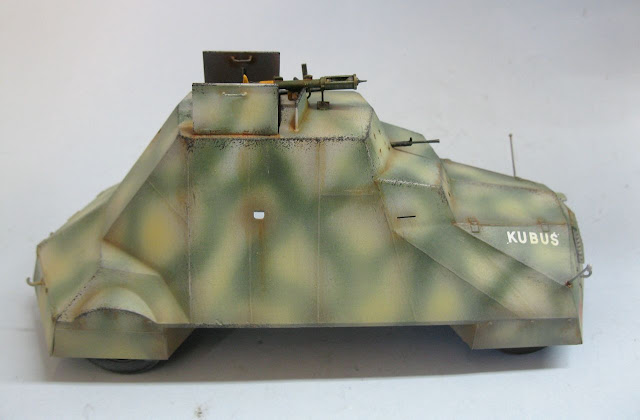 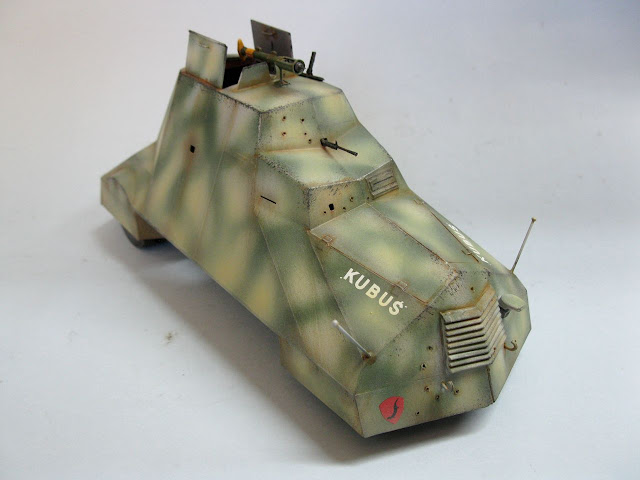 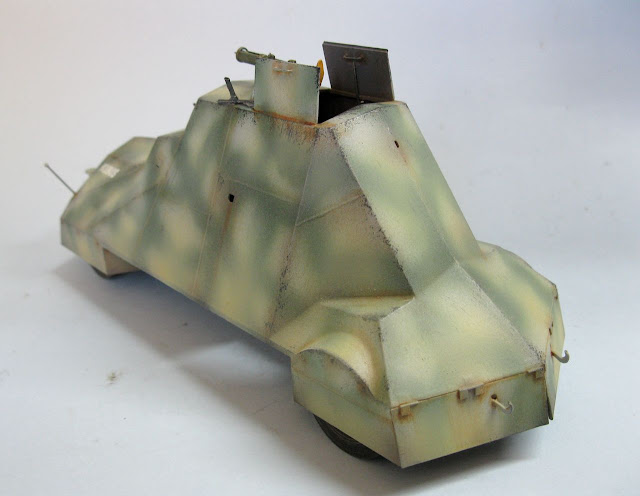 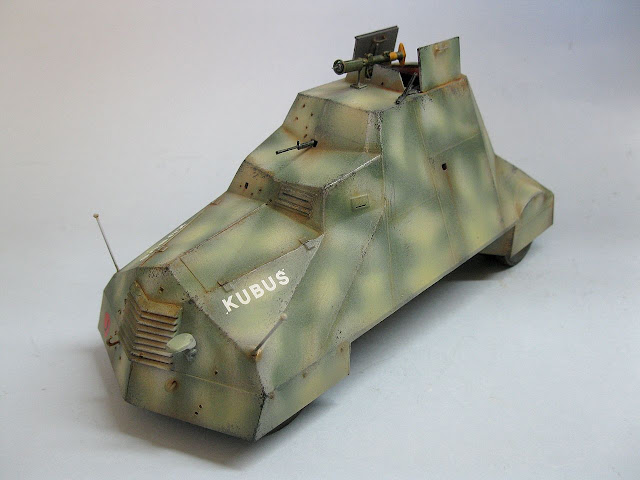