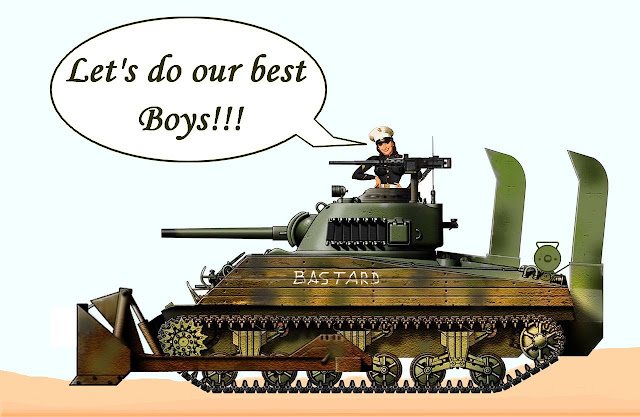 The destruction generated by military operations, and various obstacles deployed by the Axis forces to slow down the progress of the Allied armour led to the need for a dozer tank. The US Army needed an armoured dozer able to clear roads, fill in ditches and bomb craters, clear rubble and move destroyed vehicles blocking roadways. The allied armies used several types of bulldozer, however, these machines were un-armoured and could be used only in zones far away from the frontline.

The combination of a dozer blade with an armored fighting vehicle was first tried by the British Army in the North Africa theatre, during their campaign of 1940-1941, as a means of eliminating personnal and-or vehicle mines in the army's track.  By 1942, mine detectors were capable of finding hidden mines and the bulldozer blade equipped tank could then excavate the mines and move them out of the path. This could be accomplished without significant risk to the tank crew who were protected by the tank's armor and still retained the military capacity with maintenance of the main gun.

After American officers observed the British success, the US Army Corps of Engineers was assigned the role of creating and testing a tank/bulldozer vehicle. During 1942, the Engineer Board considered several different ideas. Destroying mines was only one potential task for a tank dozer that could also tackle overcoming ditches, debris, craters, and other antitank obstacles. It was not obvious that a tank was best; armored tractors were considered as an alternative design. 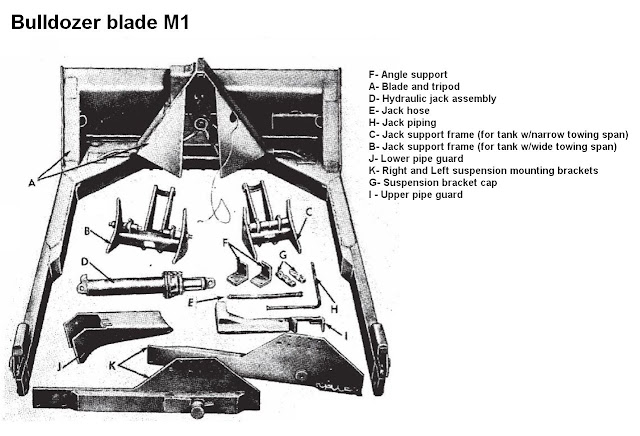 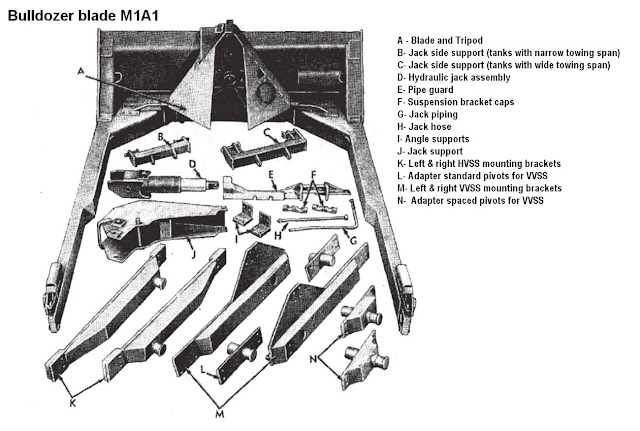 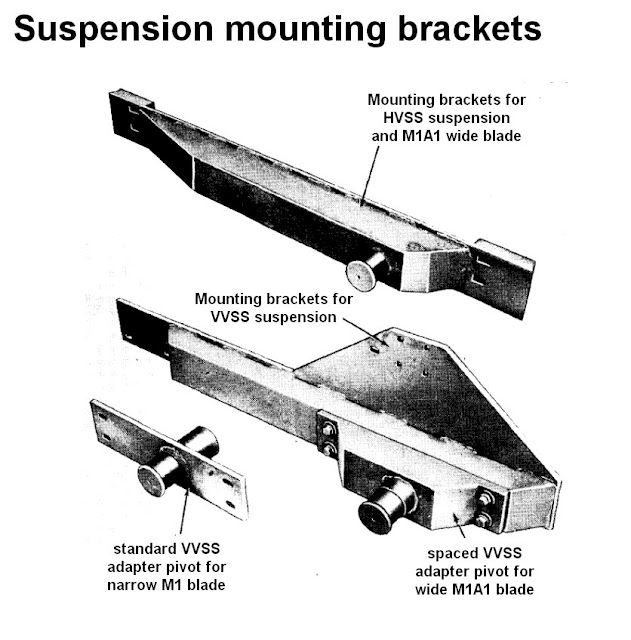 Italy was the first combat use of the Sherman Bulldozer tanks. There the German Army was careful to destroy the bridges, culverts, and mountainside shelf roads that the Allies needed in their advance up the Italian peninsula. German units then used light-caliber weapons to stop the men and bulldozers sent forward to restore the roads. The Sherman tank-dozers solved this problem making immediate positive changes in the situation. At the Anzio beachhead, tank-dozers were used to extinguish fires in the large ammunition dumps that were targeted by German artillery. Once the tank-dozers were available, even large fires could be quickly contained by scooping dirt and pushing it over the burning containers.
The lessons learned in Italy made the Sherman-dozer an item of high demand for the European Theater (ETO) from the invasion of Normandy to V-E Day. General Eisenhower expressed a personal interest in increasing the supply of these versatile machines, but manufacturing never caught up with orders from the field. For D-Day, a total of 393 tank dozers were requisitioned prior to 9 May 1944 for US forces, and another 100 for the British and 24 for the French. Only 24 were received in April 1944 and another 81 in May, far fewer than the requests. Nonetheless, the tank dozers were essential in clearing beach obstacles and allowing units to move off the beaches on D-Day and immediately after.
Following D-Day in the early stages of the Battle of Normandy before the Culin Cutter was developed (also called Rhino or Hedgerow Buster), the dozer Sherman was the best method of breaking through the Bocage hedgerows. Working with artillery and infantry, the tank dozers were highly effective in disrupting German defenses and making territorial gains.
As the Allied armies moved out of France and closer to Germany, the tank dozers prepared tank and gun emplacements, cleared roadblocks, removed wrecked vehicles, snow and debris, filled craters, cleared mines, and built approaches for river crossings. While there were some mechanical and operational problems with the Sherman tank dozer, the value far outweighed the deficiencies with great benefit to the users.
Relatively few Sherman tank bulldozers were used in the Pacific Theater of WW II, with some dozer-equipped light tanks filling the role. Where the Shermans were used, the tasks were similar to the ETO, such as clearing beach obstacles, creating ramps for landing craft, filling craters, removing road obstacles, sealing cave defenses, and general earthmoving duties. 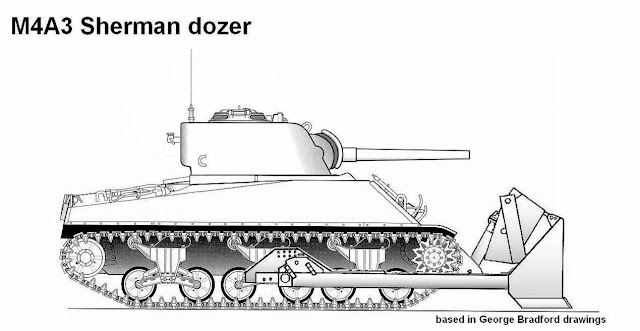 ...and the dozer blade what's left of an previous project. The dozer come from Academy M4A3E8 Sherman 105 howitzer (#13207).
My goal with this project is to build a kit to test an idea: Use the dozer blade Academy M1A1 as M1, ie, the most common type. Let's go with the challenge!!!
I have a dozer blade M1 from Verlinden (#648) in my closet, but I did not want to waste a more refined resin kit with this inferior injected Italeri kit.
Let's try to turn the dozer Academy M1A1 in a most common M1 blade: the difference between the width of the blades would be 10mm in the scale 1/35, but when I put the blades side by side, the difference was 7mm (sorry...my comparative photo is lost... but see the pic below...)
The first challenge was scratch the suspension mounting brackets for VVSS tanks. For that, I scanned the Verlinden metal parts and cutted the plasticards in the proper size. My objective was not to make the wide pivot, but scratch the suspension bracket with the standard pivot for the M1 blade (narrow). 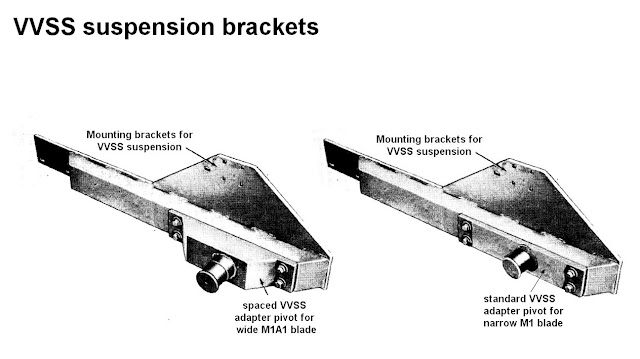 My girl shows a late configuration of the 75mm turrets: high bustle, all vision commander cupola and loader hatch.

For the cammo, I sought inspiration in these colors of the Marines in the Pacific.

But I'm not exactly reproduce this Sherman, because the models are different and the kit is very inaccurate ... I'll make a M4A3 dozer generic, unspecific, called Bastard !! 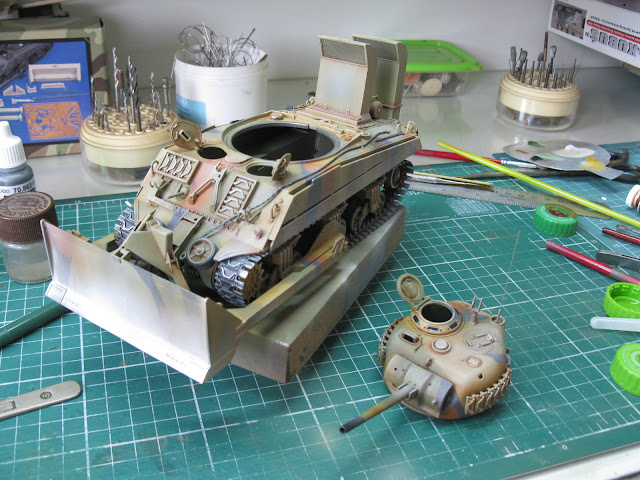 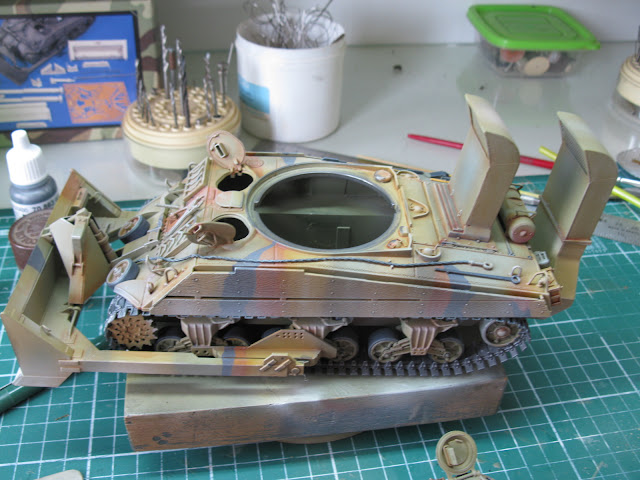 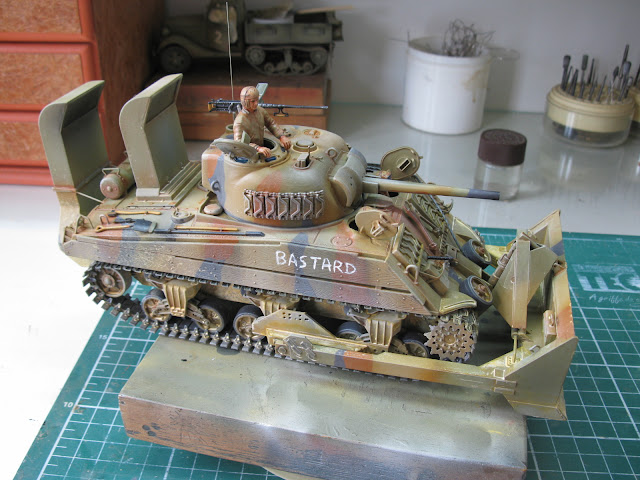 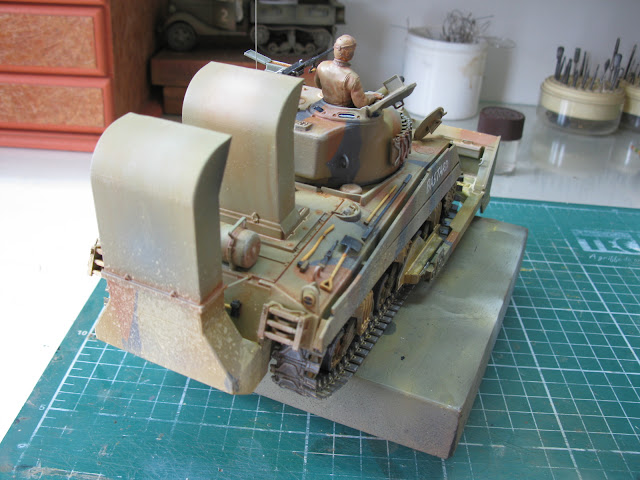 And my swift and mad project was done. The kit represents a M4A3 (75) Sherman dozer BASTARD with deep wading gear, immediately after landing on an island under Japanese rule, in 1944-45. Marine Corps, unit unknow. 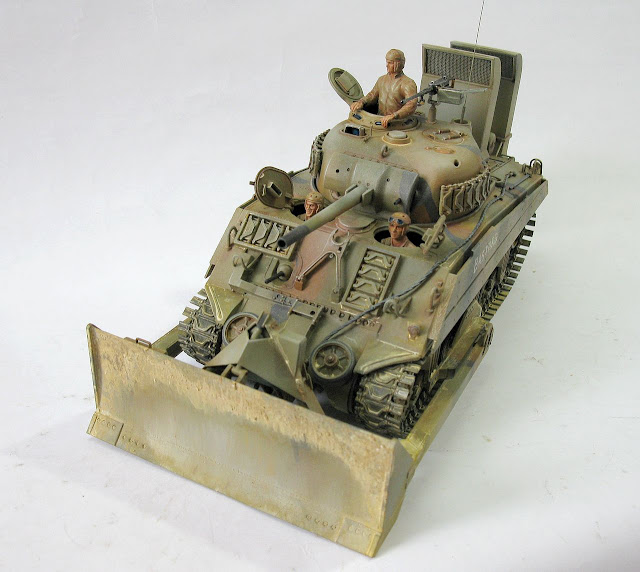 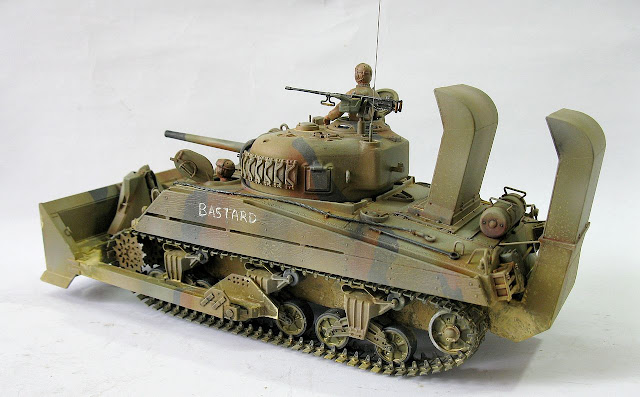 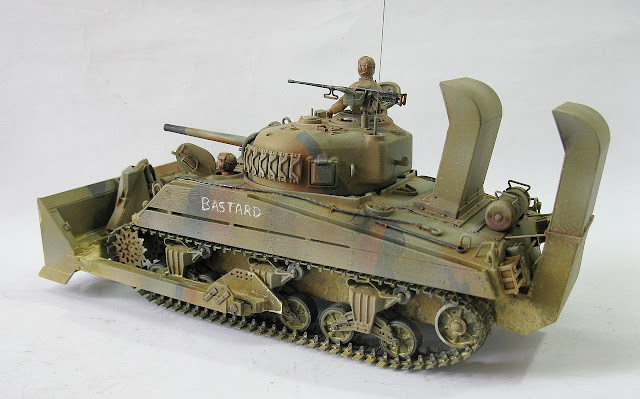 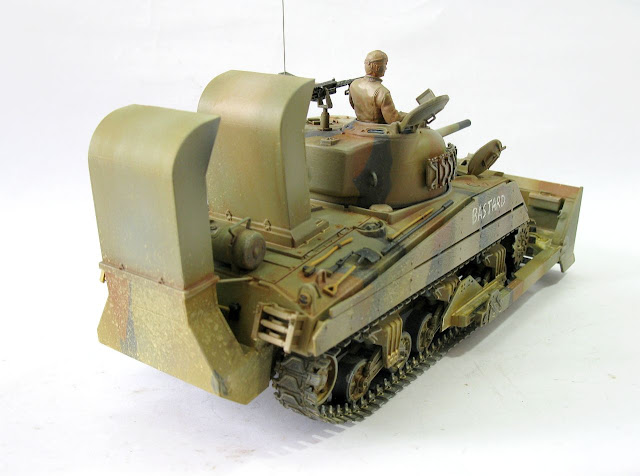 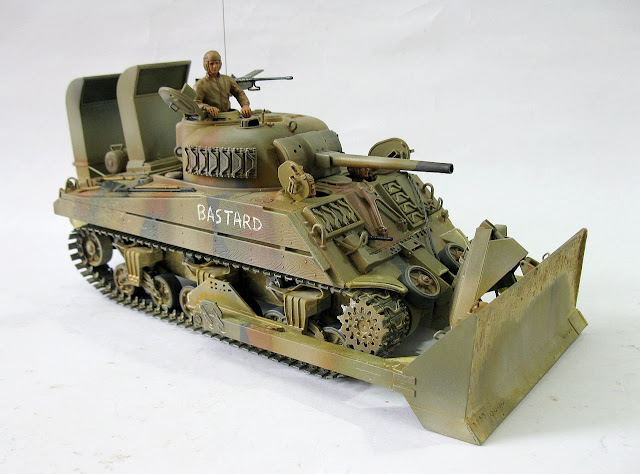 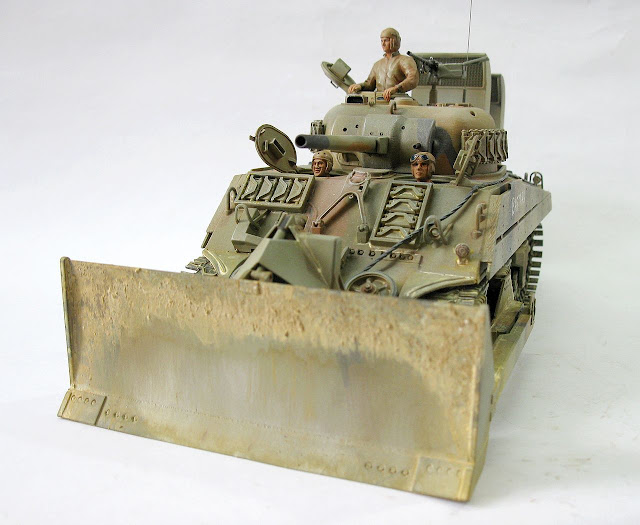 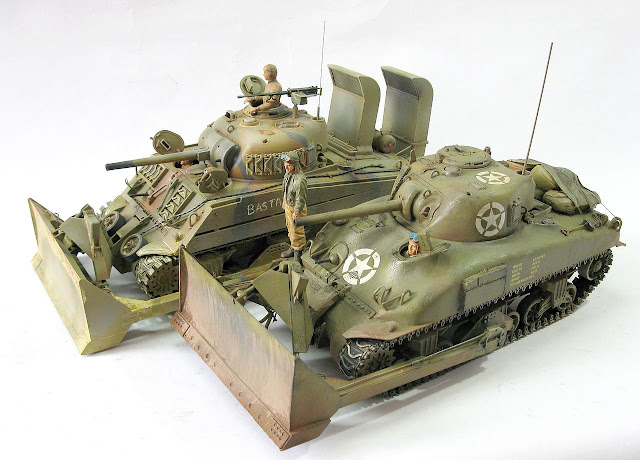 Well, after the completion of this project, I consider the option of the use the dozer Academy as a great option. The price of a Verlinden kit is more expensive than a complete Academy kit and you still gets a Sherman M4A3E8 Easy Eight (excellent) as a bonus ... !!