Our subject today is a peculiar self-propelled artillery vehicle. Built in small numbers at the beginning of WWII, it played a decisive role in supporting fire for infantry in the shocking early days of applying the Blitzkrieg doctrine.
We are talking about the 15 cm sIG 33 (Sf) auf Panzerkampfwagen I Ausf B, the Bison I, which looks dubious, but has proven great efficiency! 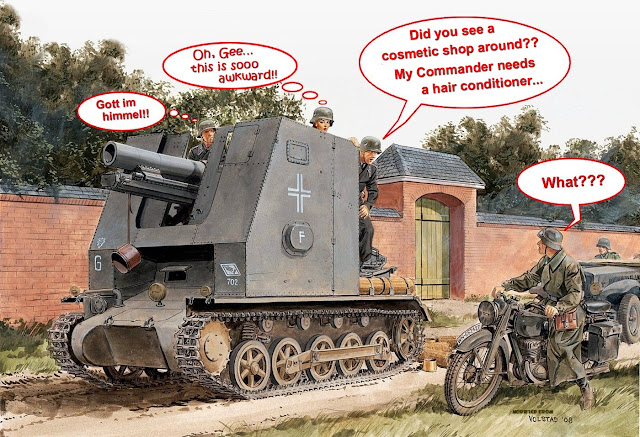 History:
The 15cm sIG 33(Sf) auf Pz.Kpfw.I Ausf B, sometimes referred to (unofficially) as the Sturmpanzer I Bison was a German self-propelled howitzer used during World War II
The Invasion of Poland had shown that the towed 15cm sIG 33 guns assigned to the infantry gun companies of the motorized infantry regiments had difficulties keeping up with the tanks during combat. 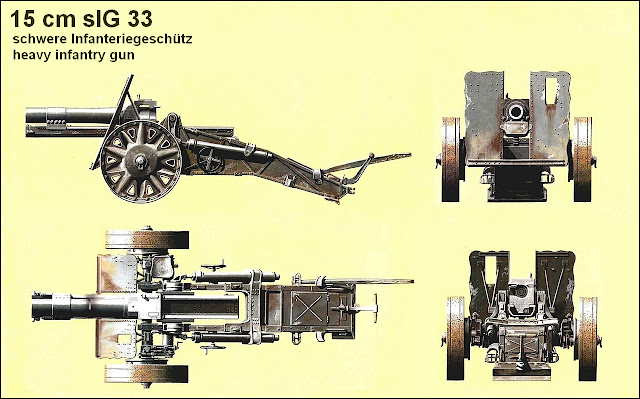 The easiest solution was to modify a spare tank chassis to carry it into battle. A sIG 33 was mounted on the chassis of the Panzer I Ausf. B, complete with carriage and wheels, in place of the turret and superstructure. 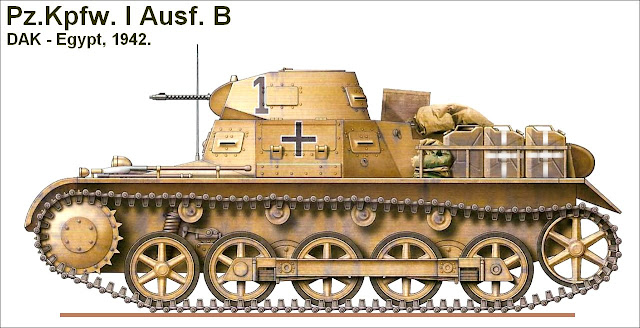 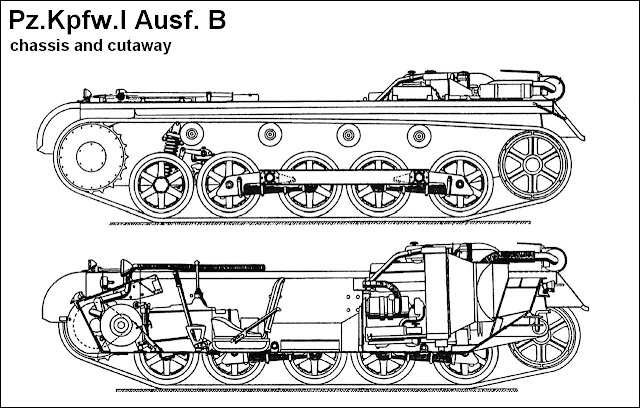 Plates with13mm (0.51 in) thick were used to form a tall, open-topped fighting compartment on the forward part of the hull. This protected little more than the gun and the gunner himself from small arms fire and shell fragments, the loaders being completely exposed. The rearmost section of armor was hinged to ease reloading.
There was no room to stow any ammunition, so it had to be carried by a separate vehicle. When mounted, the sIG 33 had a total traverse of 25° and could elevate from -4° to +75°. The gun used an Rblf36 sight. The chassis was overloaded and breakdowns were frequent. The vehicle's high profile (and therefore an easy target ...) and lack of on-board ammunition were severe tactical drawbacks. Thirty-eight were converted in February 1940 by Alkett.
In the video below, see the evolution of the 15 cm sIG 33 (Sf) auf Panzerkampfwagen I Ausf B concept:
In the video above, the scenes in which the 15 cm sIG 33 (Sf) auf Pz.Kpfw. I Ausf B is shooting are too dark (Game of Thrones - final season effect ...). I dig this movie in  the Internet, remastered and much more visible, showing this part of ht firing action (see video below). Notice how the vehicle "jumps" when its main weapon is fired, as the lightness of the chassis does not allow an adequate dissipation of the energy generated by the shot.
In Action:
Thirty-six vehicles were organized into independent schwere Infanteriegeschütz-Kompanie (mot.S.) ("self-propelled heavy infantry gun companies") numbers 701-706, assigned to Panzer divisions in the Battle of France, as follows:
As part of the 5th Panzer Division, assigned to the German XIVth Motorized Army Corps, the 704th company participated in Operation Marita, the invasion of the Balkans.
Later in 1941, the same assignment was maintained for Operation Barbarossa, the invasion of the Soviet Union. The 705th and 706th belonging to the 7th and 10th Panzer Divisions respectively, were destroyed at this time. Of the remaining companies, only the 701st participated in the opening stages of the subsequent Case Blue in 1942, although it, and its parent 9th Panzer Division, were transferred to Army Group Center by the end of the summer of 1942.

The last reference to these vehicles is with the 704th Company of the 5th Panzer Division during the middle of 1943.
Specs: 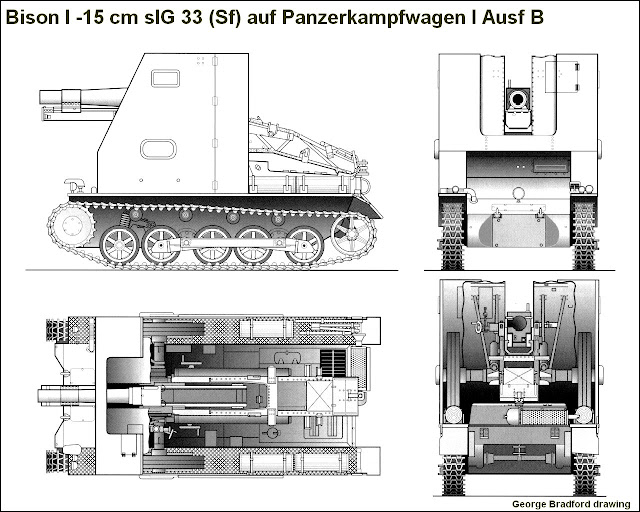 The kit:
For this commission project, the kit I'm going to use is a classic (2005) from the scale model world: the Alan (#019) Bison I.
I think I bought this kit at that time and I haven't had the opportunity to build it yet ... And that opportunity has arrived. Nowadays we have even more modern and detailed options to represent this SPG model, like the excellent Dragon (#6259) 15cm s.IG.33 (Sf) auf Pz.Kpfw.I Ausf.B Smart Kit , but as I have the child Alan in my closet, we will dare to build it !!!
Let the battle begin !!!  The Alan Bison I is a very complete kit, with plastic sprue, photoetched fret, decalsheet (waterslide) for 4 versions and tracks link-by-link (which many like, but I hate ...). The details are poor, but I've seen much worse kits ...

As I always do, I like to study the construction drawings to avoid surprises and headaches ... And here's a big problem: after step 2 of construction, there should be a step on how to glue the front bottom armor to the front portion of the lower hull. This stage simply does not exist ...
Well ... let's deduce that the part fits the lower hull front opening and after sliding to the rear bottom armour, it rotates and the transmission shaft cover fits into a recess in inner portion of the bottom armour. See the "original" drawing of the Alan's Bison I instructions booklet, below:
The big problem is the C3 parts, which support the suspension shock absorber arms. The C3 parts have a small tab (see below - red arrows) that should fit into a slot in the front portion of the armor bottom, but when trying to do this maneuver, the bottom of the driver's station just doesn't fit. The best option I found was to cut this small tab of the C3 pieces (left and right) and glue this fragment into the armor at the bottom of the driver (pink details below). Also cut the two suspension bars that are on the sides of the drive shaft cover (light green arrows). You'll be able to replace them later, much more easily. With that, the armor bottom front rotates normally and everything fits together satisfactorily ...
See the C3 tabs cutted and glued in the bottom armour of driver station (red arrows below):

After that, I used the rest of the paint in my airbrush and sprayed over the kit... I hate waste !!!
Sometimes, it is very pleasant to make a small up-grade with simple materials, but that represent great details. Here is a good example: The C30 parts (in the red circle, below), which "reproduce" the return springs of the rear fender flaps are simply horrible ...
Its replacement is simple and quick: two little parts of Plastruct (0.5mm round rods) supporting the "spring" made with the handle cut from an acupuncture needle. Here is the final result ...

Indeed, the big 15cm sIG 33 howitzer is a big weapon. The instructions are perverse... You need to study pics, drawings and other better instructions for other kits (thanks a lot, Scalemates!!) to build this gun in the right way... From what I've built so far, Alan's kit isn't that bad. The worst, in my opinion, are the instructions, which do not clarify the small "big" details. And this defect is evident at this stage of the howitzer's building.


The worst part is the installation of the wheels in the trial of the weapon. In this matter, the booklet is practically useless... I recommend anyone who builds this kit to study the Dragon booklet (... of the same vehicle) or the AFV Club booklet, of SIG 33 kit, which allows a "spatial" view that can guide you through this Valley of Shadows and of Death. Be very careful with the perpendicularity of the wheels in relation to the "chassis" (trial) of the howitzer.
Testing the gun in dry-run on the vehicle is very, very important ... And do not stick the front shield of the vehicle except in the last step ... A great reference is to glue the wheel supports to the hull of the vehicle, with the front shield installed (but not glued ...) in position. The wheel supports have two tie rods that extend from the rear deck to the correct position of the parts. Forget the bottom pins of the brackets: they get in the way that help. I cut them without the slightest remorse.
Sorry for the absence of the photos, but this stage is so "manipulated" that it was almost impossible to photograph it. What was left of teaching was what I mentioned: first install the wheel supports!! These parts are your guide on installing the gun on the vehicle ... See the diagram below, modified from (damn) booklet:
If all ok, you can reinforce the glue, now.

Now, the best part ... the markings. The decal sheet is very good, but as I chose the spare wheels in the front armour, the decals provided are incompatible with my research, since this positioning of the spare wheels was almost a characteristic of the 701 Company, of the 9th Panzer Division, on the Russian Front in 1942. It was a temptation to use decals with vehicle names, but History is History !!!
So, let's go to the torrid summer of 1942, meet our little girl: 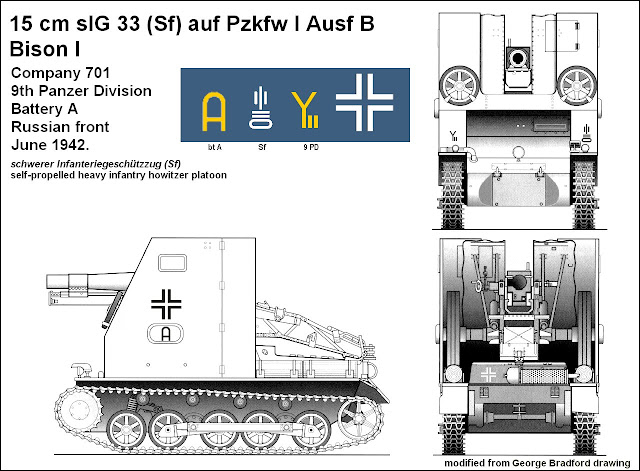 First of all, primer. I use the Vallejo one. No, I'm not a sponsored modelist, but I have adapted to this product and use it constantly. Many love him ... many hate him. I just use ... and I like it.
My two cents !!


And the 15 cm sIG 33 (Sf) auf Panzerkampfwagen I Ausf B - Bison I was ready. Look the aspect of this self-propelled heavy infantry howitzer belonged to 701 Company, A Battery, from the 9th Panzer Division, on the Russian Front in June, 1942.

I was very satisfied with the result of this project. This kit is old, without the smallest details or accessories so common in today's kits ... but with a little bit of historical research and dedication, the young lady was very presentable. And I loved the fun it provided ...
Stay with us, friends!!!
às abril 04, 2021